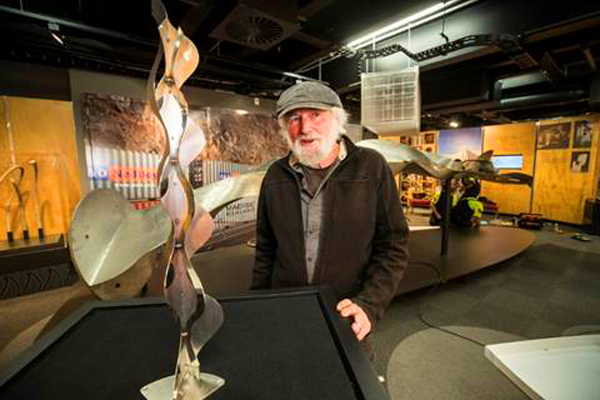 Reflect sculptor Graham Bennett at Quake City with a maquette of the work and the sculpture rescued from the rubble behind him. Source: Canterbury Museum.

A 7 metre high steel sculpture rescued from the rubble five years after being toppled by a M6.3 earthquake was today installed in Canterbury Museum’s special exhibition Quake City.

The  had stood on the edge of Philip Carter’s cliff-top garden at Clifton near Sumner since 2010. Sculptor Graham Bennett had created the work as a response to the landscape, inspired by the Avon Heathcote estuary, with interlaced steel ribbons rising from a central base, like braided rivers racing towards the sea.

In June 2016 earthmoving contractors clearing rubble with a remote controlled digger noticed something shiny. It turned out to be Reflect. The contractor ProTranz Earthmovers offered the work back to Mr Carter who in turn offered it to Canterbury Museum.

Museum Director Anthony Wright says he is very pleased to have the work installed in Quake City. “Philip Carter and his family are long-time friends and supporters and we’re grateful for his generosity in donating Reflect to the Museum.”

Broken and mangled by the impact of the earthquake, the sculpture now rests at an angle on a steel plinth specially created for it by Graham Bennett.