March 19th, 2022 | Browse other: News. | Tagged with: A new 'world class' Museum of History has opened to the public in the Macquarie University Arts Precinct, East Meets West - the Crusades and the Age of Decolonisation | 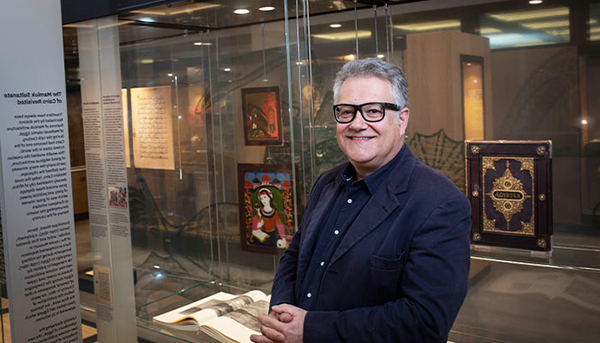 A new ‘world class’ Museum of History has opened to the public in the Macquarie University Arts Precinct, where treasures spanning millennia and a feature exhibition spotlighting an extraordinary time in world history are now on display.

An era that stands between the ancient and modern worlds is featured in the first temporary exhibition at Macquarie University’s stunning new Museum of History.

In East Meets West – the Crusades and the Age of Decolonisation, select objects from the Museum’s own 18,000-piece collection join treasures on loan from private collectors to tell a story of a turbulent and defining era in human history.

From 1095 to 1301, Christians under the rule of the Pope sought to wrest the Holy Land in the Eastern Mediterranean from its powerful Islamic rulers, costing millions of lives and refiguring the world forever.

As the exhibition explains, this world war involved almost all European nations on one side and, on the other, Muslim armies of Greater Syria, Turkey, Egypt and Arabia.

The whole world came together and people grew together, but it was only for a very short period of time, 45 years, because then the Black Death came.

“After that war had raged for 206 years, the world had changed,” says the exhibition’s curator and Museum Director Professor Martin Bommas. “Europeans had had enough of Vatican rule and started establishing monarchies; new political ideas were coming up and people were connected by trade; Arabic literature was influencing the West and Western architecture was slowly being introduced through the east.

“So the whole world came together and people grew together, but it was only for a very short period of time, 45 years, because then the Black Death came.” 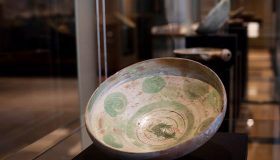 Delicate design: A so-called crusader bowl, hailing from the Levant of the 12th and 13th centuries.

In a sobering reflection of our times right now, Cairo alone experienced 50 waves of Black Death in 150 years; across the known world, nine million people died, “but it could easily have been three times as many,” Bommas says.

The exhibition begins with a timeline outlining events from the first Crusade in 1095, to the Battle of Tannenberg in 1410 when the religious military Teutonic Order – which had been founded in Jerusalem in the 1190s to aid Christian pilgrimage to the Holy Land – was defeated.

Among exhibits including illuminated manuscripts and gold jewellery, so-called crusader bowls – part of the museum’s own collection and hailing from the Levant of the 12th and 13th centuries – feature sgraffito art pioneered by the Byzantines, where two layers of contrasting clay were laid down and designs delicately scratched into the upper layer.

The underglaze of the bowls is in a shade of green that has been replicated in graphic designs, imprinted on the glass cabinets containing the exhibits, that depict traditional Arabic latticework and a Muslim warrior on horseback in combat with the Franks.

On public display for the first time are rare gold-illuminated leaves of the Holy Qur’an from the 14th and 15th century. Bommas’s favourite exhibit, the calligraphy they feature showcases a defining art form of Egypt’s Mamluk era, the Mamluk Sultanate being the Islamic power that captured the Kingdom of Jerusalem from the Christians in 1291. 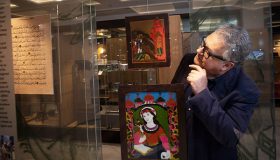 Powerful combination: The exhibition brings together pieces from the museum’s collection and items on loan from private collections.

“The Mamluks built a dynasty based on slavery; they basically brought young boys from the steppes in Russia to Cairo where they educated them and turned them into military leaders, so that the sultanate became a superpower that could withstand Genghis Khan and the Mongols – the third superpower at that point in time, who wanted to rush into Europe and were stopped by the Muslims,” Bommas explains.

The Mamluks also developed grand religious architecture that saw towering minarets come to define the Cairo cityscape, turning it into the world’s most beautiful city.

When Napoleon came through on his Egyptian campaign at the end of the 1700s, he was accompanied by the artist, and later the first Director of the Louvre, Dominique Vivant, Baron Denon, who meticulously recorded in engravings the Egypt that lay before him. 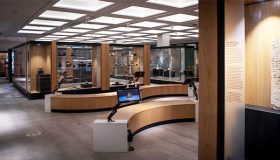 World class: A general view of the purpose-built museum which opens to the public this month.

“They were published in his Description de L’Égypte, regarded as the best achievement of culture of the entire 18th-century worldwide,” Bommas says.

“Because he knew it was going to be such a success, he published his own mini version of it” – a fascimile of which is part of the exhibition.

In a nod to the period it illuminates, the temporary exhibition runs down the middle of the History Museum. Purpose-built within Macquarie’s new Arts Precinct, Bommas describes the space and its collection as world class.

It merges the University’s Australian history, cultural heritage and ancient cultures collections under one roof, and in doing so covers five continents and more than 5000 years of history, inviting visitors “to explore the ancient roots of modern civilisation”.

Martin Bommas is Professor and Museum Director at Macquarie University and Director of the Qubbet el-Hawa Research Project in Aswan, Egypt.