Two years into the COVID-19 pandemic, scientists are the most trusted members of society – by three-quarters of people – while government leaders are the least trusted.
“My employer” is now the most trusted of any institution at 77%, and workers expect CEOs to be the “face of change”.

But distrust has become society’s “default emotion”, with 60% of people inclined to “distrust until they see evidence something is trustworthy” – which could hamper progress on tackling global challenges including climate change.

These are some of the findings of the Edelman Trust Barometer 2022. The report, which is now in its 22nd year, surveyed 36,000 respondents in 28 countries. 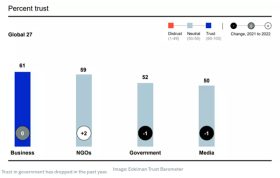 “Government was the most trusted institution as recently as May 2020, when the world sought leadership capable of tackling a global pandemic,” says Edelman CEO Richard Edelman.

“Now, after the confused and bungled response, when it comes to basic competence, government is less trusted than businesses and NGOs. People still want government to take on the big challenges, but only four in 10 say government can execute and get results.

“In a critical litmus test, respondents in every democracy studied believe they will be worse off financially in five years.” 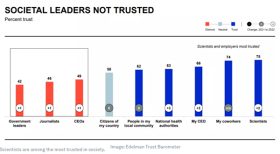 Edelman says this year’s Barometer shows there are four forces at work that could destabilize society and stop progress on tackling COVID-19, climate change and racism if left unchecked.

“Two institutions people rely on for truth are doing a dangerous tango of short-term mutual advantage, with exaggeration and division to gain clicks and votes,” says Edelman.
Government and media are seen as dividing forces, while business and NGOs are seen as unifying. And two-thirds of people are convinced they’re being lied to by journalists, heads of government and business leaders. 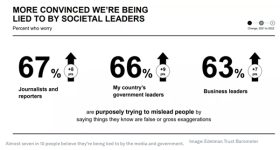 “Government failure has created an over-reliance on business to fill the void, a job that private enterprise was not designed to deliver,” says Edelman.
Respondents want business to play a bigger role on climate change, economic inequality, workforce reskilling and racial injustice: “Every stakeholder group expects business to lean in, with nearly 60% of consumers buying brands based on values and nearly two-thirds of employees asking companies to take a public stand on issues.”