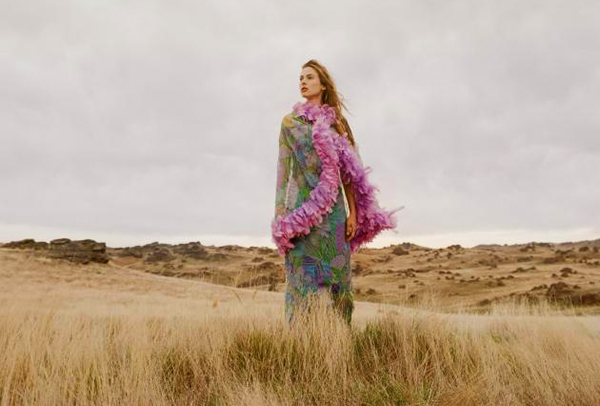 After being shrouded in secrecy, an exclusive collection of images featuring the Eden Hore fashion collection has been unveiled to the world.

The garments — a collection of almost 300 couture dresses accumulated by the high country farmer — give a glimpse into New Zealand fashion in the 1970s and 1980s.

In keeping with the era, the images — shot on location at St Bathans, the Bannockburn Sluicings and Poolburn Dam — were captured using medium format film.

The collection of images was revealed at a private ‘‘first-look’’ event hosted by the Central Otago District Council, in conjunction with Te Papa, in Alexandra last month.

The council bought the Eden Hore Collection from the Hore family in 2013 for $40,000, and a steering group was set up to determine its future.

In 2019 the council entered into a partnership agreement with Te Papa, formalising the museum’s support of the council holding the collection.

Central Otago Mayor Tim Cadogan said there had been ongoing work to ensure the future of the collection and he was excited to be at a point to share more widely the ‘‘story of the journey to date and the ‘where to next’’’.

The photographs have been produced as a limited-edition series and are set to feature at The Dowse Art Museum in Lower Hutt, one of New Zealand’s leading contemporary art galleries.

The photos will be displayed alongside 25 of Mr Hore’s couture garments in the ‘‘Eden Hore: High Fashion/High Country’’ exhibition as part of the gallery’s 50th anniversary.

The exhibition will open December 4 and run for three months.

Central Otago residents will get to view the images during summer in a series of pop-up visitor displays throughout the region, featuring the photographs and some of the stories surrounding the collection.

The locations of the pop-up series are yet to be announced.