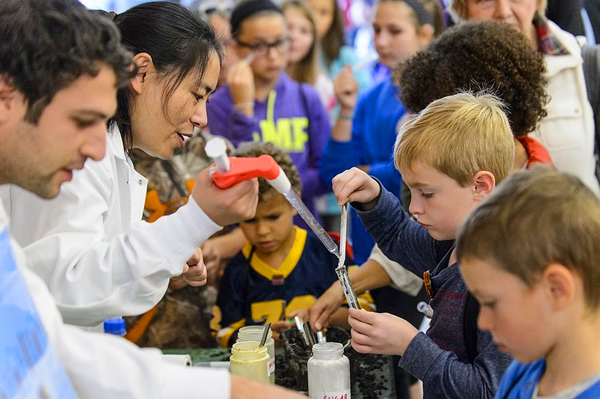 Bacteriologists engage with kids at the Wisconsin Science Festival, one way of communicating science to the public. Bryce Richter/UW-Madison. Source: The Conversation.

Andrew Maynard and Dietram A. Scheufele, What does research say about how to effectively communicate about science?, The Conversation, 14 December 2016

Truth seems to be an increasingly flexible concept in politics. At least that’s the impression the Oxford English Dictionary gave recently, as it declared “post-truth” the 2016 Word of the Year. What happens when decisions are based on misleading or blatantly wrong information? The answer is quite simple – our airplanes would be less safe, our medical treatments less effective, our economy less competitive globally, and on and on.

Many scientists and science communicators have grappled with disregard for, or inappropriate use of, scientific evidence for years – especially around contentious issues like the causes of global warming, or the benefits of vaccinating children. A long debunked study on links between vaccinations and autism, for instance, cost the researcher his medical license but continues to keep vaccination rates lower than they should be.

Only recently, however, have people begun to think systematically about what actually works to promote better public discourse and decision-making around what is sometimes controversial science. Of course scientists would like to rely on evidence, generated by research, to gain insights into how to most effectively convey to others what they know and do.

As it turns out, the science on how to best communicate science across different issues, social settings and audiences has not led to easy-to-follow, concrete recommendations.

About a year ago, the National Academies of Sciences, Engineering and Medicine brought together a diverse group of experts and practitioners to address this gap between research and practice. The goal was to apply scientific thinking to the process of how we go about communicating science effectively. Both of us were a part of this group (with Dietram as the vice chair).

The public draft of the group’s findings – “Communicating Science Effectively: A Research Agenda” – has just been published. In it, we take a hard look at effective science communication; what makes it so challenging – especially where the science is uncertain or contested; and how researchers and science communicators can increase our knowledge of what works, and under what conditions.

As we discovered, effective science communication – including listening to and engaging with audiences – is particularly complex, and far from simple to study. It’s highly dependent on what is being communicated, its relevance to who’s participating in the conversation and the social and media dynamic around the issues being addressed (especially if those issues or their policy implications are contentious). But it also depends on what people feel and believe is right and the societal or political contexts within which communication and engagement occur. And this makes getting it right and deriving lessons that can be applied across issues and contexts particularly challenging.

Because of this complexity, the practice of science communication (and there are many great practitioners) is currently more of an art than a science. Good communicators – whether reporters, bloggers, scientists or people active on social media and platforms like YouTube – typically learn from others, or through professional training, and often through trial and error. Unfortunately, the social sciences haven’t provided science communicators with concrete, evidence-based guidance on how to communicate more effectively.

Two earlier NAS meetings identified how diverse the areas of expertise are when it comes to research on science communication. Research spans behavioral economics and sociology along with media and communication studies. They also began to map out what we do and don’t know about what works.

For instance, it’s becoming increasingly clear that the “deficit model” of science communication – the assumption that if we just “fill people up” with science knowledge and understanding, they’ll become increasingly rational decision-makers – simply does not work. This is not because people are irrational; rather, we all have our own built-in psychologies of how we make sense of information, and how we weigh different factors when making decisions.

We also know all of us are predisposed to accept, reject or interpret information based on a plethora of mental shortcuts, including a tendency to take on face value information that seems to confirm our worldview.

And we know how information is presented, or framed, can have a profound impact on how it is interpreted and used. The power of the “Frankenfood” frame, for example, used with genetically modified foods, has nothing to do with providing new information. Instead, the term subconsciously connects genetically modified organisms to mental concepts we all share – worrisome ideas about scientists creating unnatural organisms with unintended consequences – and raises moral questions about science going too far.