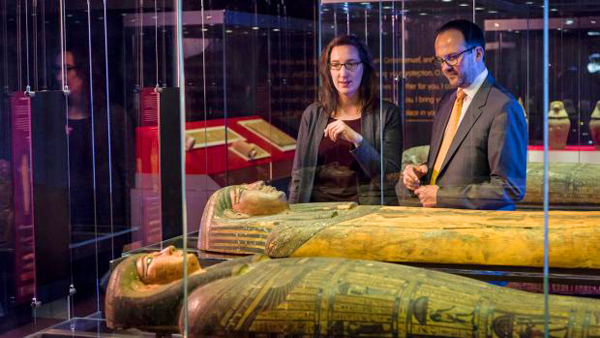 The body of Tamut, an Egyptian priestess born more than 2900 years ago and buried with a winged goddess amulet at her throat, is one of six mummies who have have been virtually unwrapped as part of Queensland Museum’s latest exhibition.

Using non-invasive CT scanning, researchers from the British Museum peeked inside the carapaces of a female temple singer, a priestess, a wealthy married woman named Nestawedjat, a priest, a young man and a two-year-old boy to bring their findings to Brisbane in Egyptian Mummies: Exploring Ancient Lives.

The scans take less than a minute and use two x-ray machines with different settings to image the thinner and thicker parts of the mummies to create a 3D visualisation, British Museum curator Daniel Antoine said.

Visitors can watch minute-long clips of the virtual unwrapping of an overweight young man from Roman Egypt who was mummified without embalmers removing his organs, or Irthorru, a priest with several teeth missing.

“That (footage) is thousands of hours of work because what we have to do is identify where the skin finishes and where the textile begins so we can tell the computer to virtually unwrap it,” Dr Antoine said.

“We are using some of the best 3D volumetric rendering software in the world so we are accurate as possible so we get the public as close to the truth as science allows us to do without physically unwrapping them.”

Fellow British Museum curator Marie Vandenbeusch said she felt like a child when she first watched the scans bringing these ancient Egyptians to life.

“I am sure they are for a specific reason but I am not quite sure what that is and I think that is wonderful for us because every time we are learning new things and learning more about the mummies, the individuals, but also the people who embalm them.”

Sitting alongside the mummies were 200 objects from the British Museum collections and 3D-printed versions of the amulets still resting on Tamut.

“We learnt a lot of things about the skeleton for example and that told us a lot about whether they had fractures or anything like that,” she said.

“The teeth were also really revealing and what we noticed was a lot of mummies in this exhibition have really bad dental health which is possibly linked to diet and so on.

“The soft tissues are much more difficult because they either remove the organs or they are really shrunk so we can’t really see anything, that is why for most of them it is really difficult to have a cause of death.”