You are here: Home » Articles filed under: 'News' » Article: 'Egyptians petition for BM to return'

Egyptians petition for BM to return 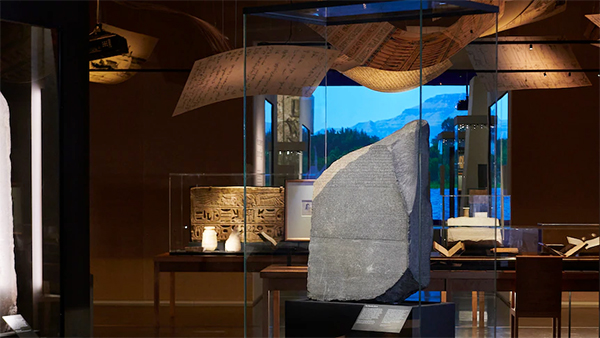 The Rosetta Stone was taken to Britain by troops who claimed it from the French. (AP: The British Museum).

Thousands of Egyptians are calling on the British Museum to return the Rosetta Stone in the lead-up to the 200-year anniversary of the decipherment of hieroglyphics.

The inscriptions on the dark grey granite slab became the seminal breakthrough in deciphering ancient Egyptian hieroglyphics after it was taken from Egypt by forces of the British empire in 1801.

”The British Museum’s holding of the stone is a symbol of Western cultural violence against Egypt,” Arab Academy for Science, Technology and Maritime Transport dean Monica Hanna said.

The acquisition of the Rosetta Stone was tied up in the imperial battles between Britain and France.

After Napoleon Bonaparte’s military occupation of Egypt, French scientists uncovered the stone in 1799 in the northern town of Rashid, known by the French as Rosetta.

When British forces defeated the French in Egypt, the stone and over a dozen other antiquities were handed over to the British under the terms of an 1801 surrender deal between the generals of the two sides.

A petition by Dr Hanna has attracted 4,200 signatures and says the stone was seized illegally and constitutes a “spoil of war”.

The claim is echoed by Egypt’s former minister for antiquities affairs Zahi Hawass, whose petition has more than 100,000 signatures.

Dr Hawass argues that Egypt had no say in the 1801 agreement, which the British Museum rejects.

The museum said the 1801 treaty included the signature of a representative of Egypt and refers to an Ottoman admiral who fought alongside the British against the French.

The museum also said Egypt’s government had not submitted a request for its return.

Carved in the second century BC, the slab contains three translations of a decree relating to a settlement between the then-ruling Ptolemies and a sect of Egyptian priests.

The first inscription is in classic hieroglyphics, the next is in a simplified hieroglyphic script known as Demotic, and the third is in Ancient Greek.

Through knowledge of the latter, academics were able to decipher the hieroglyphic symbols, with French Egyptologist Jean-Francois Champollion eventually cracking the language in 1822.

”Scholars from the previous 18th century had been longing to find a bilingual text written in a known language,” said head of Egyptian Written Culture at the British Museum Ilona Regulski.

The stone is one of more than 100,000 Egyptian and Sudanese relics housed in the British Museum, many of which were obtained during Britain’s colonial rule over the region from 1883 to 1953.

It has grown increasingly common for museums and collectors to return artefacts to their country of origin, either following a court ruling or voluntarily.

Boston-based lawyer Nicholas Donnell, who specialises in artefact cases, said no common international legal framework existed and repatriation was largely at the discretion of the museum in the absence of clear evidence that it was acquired illegally.

”Given the treaty and the time frame, the Rosetta Stone is a hard legal battle to win,” Mr Donnell said.

The British Museum has acknowledged that several repatriation requests have been made to it from various countries for artefacts, but it did not provide further details.

For archaeologist Nigel Hetherington, the museum’s lack of transparency suggests other motives.

”It’s about money, maintaining relevance and a fear that in returning certain items people will stop coming,” he said.

Amid turmoil following the 2011 uprising that toppled autocrat Hosni Mubarak, Egypt saw an uptick in artefact smuggling, which cost the country an estimated $US3 billion ($4.5 billion) between 2011 and 2013, according to the US-based Antiquities Coalition.

But President Abdel Fattah el-Sissi’s government has since invested heavily in its antiquities.

The Grand Egyptian Museum has been under construction for well over a decade and there have been repeated delays to its opening.

Dr Hawass said he was not pinning his hopes on the government to secure its return.

”The Rosetta Stone is the icon of Egyptian identity,” Dr Hawass said.

”I will use the media and the intellectuals to tell the [British] museum they have no right.”