December 10th, 2021 | Browse other: News. | Tagged with: Avenue of the Sphinxes in Luxor, Egypt's ancient road of 1000 sphinxes unveiled in spectacular ceremony | 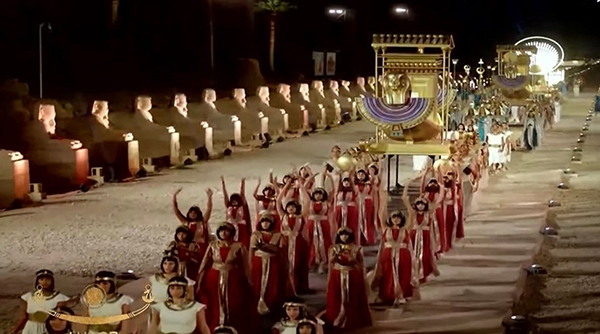 A grand parade accompanied the opening of the Avenue of the Sphinxes in Luxor, Egypt©Twitter/TourismandAntiq.

The extravagant march, attended by Egyptian President Abdel-Fattah el-Sissi, extended throughout the city, and included participants in pharaonic dress, a symphony orchestra and boats on the Nile. 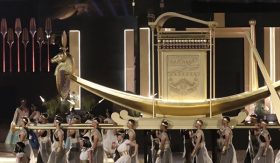 Hundreds of costumed dancers took part in the city-wide ceremony.

The academic and author Mansour Boraik says that Pharaoh Amenhotep III (who reigned 1386-1349 BC) initiated the sphinx-lined thoroughfare while it is thought that the avenue was completed during the reign of King Nectanebo I around 2,400 years ago.

The Avenue of the Sphinxes was first discovered in 1949 during excavations conducted by Zakaria Ghonaim in front of Luxor Temple. Between 1958 and 1960, the leading Egyptian archaeologist Mohamed Abdel Kadir uncovered the first part of the avenue near Luxor Temple.

The ongoing conservation project was halted however in 2005 and, after the Arab Spring in 2011, digging resumed in 2017. But according to the news website Al-Monitor, the Egyptian authorities removed hundreds of homes and mosques as part of the $38m overhaul.

Mustafa al-Saghier, the director of the Karnak Temple complex and general supervisor of the Avenue of Sphinxes’ renovation project, told Egyptian press that the excavation “unearthed other objects… including a wall dating back to the Roman period”. According to the National newspaper, the entire avenue and temples alongside will be publicly accessible from tomorrow.

Earlier this year, 22 royal Egyptian mummies—18 kings and four queens—were transported across Cairo as part of a lavish parade that was broadcast live on state television. The mummies, along with 17 sarcophagi (stone coffins), left the Egyptian Museum near Tahrir Square to be rehoused in the new National Museum of Egyptian Civilisation (NMEC), which finally opened in the al-Fustat district south of Cairo.

Today’s ceremony could help revive the country’s beleaguered tourist industry in the wake of the coronavirus crisis. According to Arab News, around 3.5 million tourists visited Egypt last year compared to 13 million in 2019. The Grand Egyptian Museum, located near the Great Pyramids of Giza, is scheduled to open late 2022.