You are here: Home » Articles filed under: 'News' » Article: 'Election 2022: Roadmap for Reconciliation'

Reconciliation Australia has released its roadmap for Election 2022 and beyond. 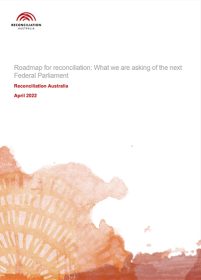 “Progress on reconciliation is what will bond our country together and set the foundation for a more just and equitable nation.”

For Australia to move forward on its reconciliation journey, an incoming Australian Government and Federal Parliament must, within the next term, work in genuine partnership with Aboriginal and Torres Strait Islander Peoples and Reconciliation Australia to:

These actions form the backbone of the Roadmap for Reconciliation: Election 2022.

“We know that more than 90% of Aboriginal and Torres Strait Islander people and the general community believe the relationship with each other is important.

“It is the belief in this relationship that drives the growing desire to progress and improve reconciliation.

“We know that almost 90% of the Australian community support formal truth-telling processes, and the majority of Australians want more to be done by government to close the gaps in health, justice and employment.

“The public is on board and our work shows it wants governments to step up too. Australians are looking for leadership and greater ambition on reconciliation.

“Whichever party forms government, it needs to be brave and ambitious when it comes to Aboriginal and Torres Strait Islander Affairs.

“We ask the incoming government and all parties represented in the next parliament to Be Brave. Make Change.

“That’s our National Reconciliation Week 2022 theme which is a challenge to all Australians including governments, to Be Brave and tackle the unfinished business of reconciliation so we can Make Change for our future as a country.”

Read the Roadmap for Reconciliation Election 2022.

The next Federal Government working with parliament must support voice, and work in genuine partnership with Aboriginal and Torres Strait Islander people through:

The next Federal Government must support truth-telling initiatives at a local, regional and national level through:

The next Federal Government must support building the foundations for a respectful relationship through: