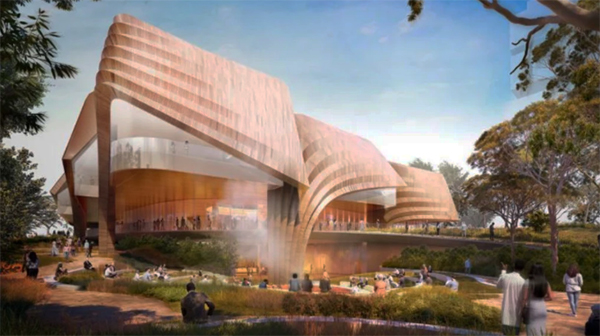 An artist’s impressions of the Aboriginal Arts and Cultures Centre to be built in Adelaide. Credit: Woods Bagot.

Elizabeth Farrelly, And the winner is … Adelaide, with the nation’s first Indigenous arts centre. It’s a triumph, The Sydney Morning Herald, 28 August 2021

You wouldn’t know it, from the way we let corporations extinguish native title, mine First Nations lands and blow up Indigenous treasures but for years now Australian states have been locked in a race to build the first national centre of Aboriginal arts. Now, it seems, we have a winner. With its new Aboriginal Arts and Cultures Centre expected to start construction before year’s end, the winner is … Adelaide! Who’d have thought?

Even more astonishing, especially to international observers, is that Australia does not already have at least one such institution. This is particularly remarkable in view of the high international profile of Aboriginal arts, both traditional and contemporary. The 2013 show of 200-plus Aboriginal painting at Paris’ Jean Nouvel-designed Musee du Quai Branly, for instance, drew more than 133,000 visitors.

Why the lacuna? Possible reasons are plentiful. For one, although Aboriginal cultures often blur the boundaries between art and d, we’re inclined to classify Indigenous artefacts as anthropology, not art, and so confine them to museums. Another reason is a widespread belief that Aboriginal cultures were largely immaterial. And one reason for that is, although some were since returned, many important artefacts were snaffled after Cook’s first visit in 1770 and shipped elsewhere. (Even recently, the Juukan Gorge inquiry heard that Aboriginal artefacts were removed by Rio Tinto’s contractors and later, they say, disposed of.) Yet another reason, arguably, is guilt.

Whatever the reasons, the gap exists and the race is on. Sydney isn’t in it. (Sydney Modern, expected to be completed next year, includes an Aboriginal and Torres Strait Islander gallery, some 40 per cent bigger than existing. But it’s the smallest of the three major new gallery spaces and far from a stand-alone centre.)

South Australia’s principal competitors are Western Australia and the Northern Territory. Before being re-elected in March, WA Premier Mark McGowan promised a $50 million contribution to an Aboriginal cultural centre on the banks of the Swan River. The site, though, is still in dispute, with bids from existing institutions such as the Berndt Museum of Anthropology and other similar museums rumoured for Peel, WA and Fremantle.

Meanwhile, back in 2018, the Northern Territory government announced a new National Aboriginal Art Gallery for Alice Springs, with a promise of $150m combined state-federal funding. A 2019 business case predicted an extra 53,000 visitors a year but, since then, little has happened and some rumours suggest Katherine, not Alice.

DS+R wouldn’t necessarily have been my choice, having designed one of Sydney’s most conspicuously soulless recent eyesores – and that’s a high bar – the Susan Wakil Health Building at USyd. Still, the Aboriginal Arts and Cultures Centre for Adelaide is a corker.

The AACC takes pride of place, nestled between the Botanic Gardens and the new tech-and-culture precinct on the old Royal Adelaide Hospital site. Significantly, you can’t enter directly from the old colonial boulevard but must follow the landscape cues – including various circular ponds, some salt, some fresh – to the building’s garden front. There, in the dappled shade of the purpose-designed outdoor amphitheatre, you’ll likely experience a Welcome to Country smoking ceremony before entering.

The building itself is conceived as a holding vessel, shaped around the emotional experience it offers. In a process described by the project’s client and stakeholder leader, Adelaide-based Rosina Di Maria, as “less design than translation”, 18 months of weekly meetings were held with different groups of Aboriginal people, guided by Arrernte elder Uncle David Rathman. 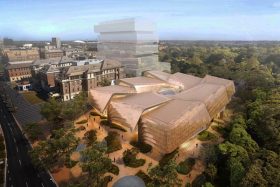 The shells of the Aboriginal Arts and Cultures Centre for Adelaide. Each shell seems to rest gently upon its neighbour in a way that suggests a collection of dilly bags or coolamons. Credit: Woods Bagot.

Di Maria was selected as team leader for her long engagement (as board member of The Jam Factory, inter alia) in promoting Aboriginal arts. That she is an interior designer, not an architect, may also incline her to what she calls a characteristic Aboriginal view that the vessel is less important than its contents.

To preserve a sense of open landscape and in deference to a common Aboriginal abhorrence of enclosure, the building’s eight shell-like forms lift themselves largely above ground. Each is rooted in the earth – an act of listening – but rises from it to act more as parasol than wall or roof.

The shells are arranged in a square whirlpool pattern around a central, glass-covered void. Clad in pleated, ochre-coloured metal upon a steel frame, each shell is self-supporting but seems to rest gently upon its neighbour in a way that suggests, without explicit figuration, a collection of dilly bags or coolamons.

The closer pleating where the shell enters the earth is meant to evoke the gathering of reeds that is the first step in making a basket or holding vessel, a form that all Indigenous people recognise, regardless of language group.

Designed to feel quasi-outdoors, the interior is loose and airy. It centres on a below-ground performance/exhibition space that can be separated from the rest at will. Above, the galleries spiral one to the other. The largest, a lofty outdoor gallery – a “palate cleanser”, in Di Maria’s phrase – orients north-east to the Gardens and kainka wirra, the lake that was a traditional meeting place for the local Kaurna people. It is modelled on the Giant’s Cave, an ancient Kaurna site in the Adelaide Hills.

Altogether, it’s less museum than anti-museum. Di Maria sees the AACC as a voice to the future, flagging that “what you thought you knew is a small piece of what you’re about to learn”. To which I can only say, high time. High time.