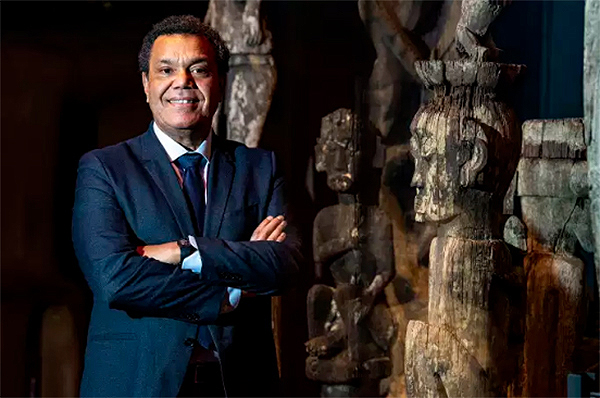 New Caledonia-born Emmanuel Kasarhérou is the first Kanak to head the Quai Branly-Jacques Chirac museum in Paris, the first major French national museum to be run by a Kanak.

Kasarhérou, 60 – who has co-curated two major exhibitions at Quai Branly including Kanak: Art is a Word — has been the museum’s deputy head of collections since 2014.

An expert in Oceanic cultures, he is the former head of the Renzo Piano-designed Tjibaou Cultural Centre in the New Caledonian capital Noumea, named after the Kanak leader who was killed in 1989.

With restitution of looted artistic and cultural treasures now a political concern for many major ethnographic collections, Kasarhérou could find himself having to navigate a minefield.

In an interview on France Inter radio on Thursday, the new director of the Quai Branly-Jacques said that museums must find “a way back” for works that were looted during colonisation.

“There is a whole historical work being done on the collections in order to identify precisely the pieces that could possibly be the object of restitution because they were taken in contexts of violence that we cannot tolerate today”, he added.

Kasarhérou said that he was committed to a “dialogue between cultures” and would continue to cooperate with African countries, some of whom are demanding the return of artefacts taken during the colonial era.

Although a hit with the public, the Quai Branly museum was hugely controversial when it opened 14 years ago both for its architecture and for the way it displayed indigenous art, with some critics calling it “colonialist” and “regressive” for the way it seemed to fetishise indigenous by exhibiting it in cabinets of curiosity style.

Former French president Jacques Chirac, himself a fervent collector of indigenous art, bulldozed the project through by merging two previous collections, despite a fierce rearguard action by some academics.

But Chirac said it was time to give non-Western art its proper place in the canon. Having made sure it would be generously funded, his name was later added to its title.