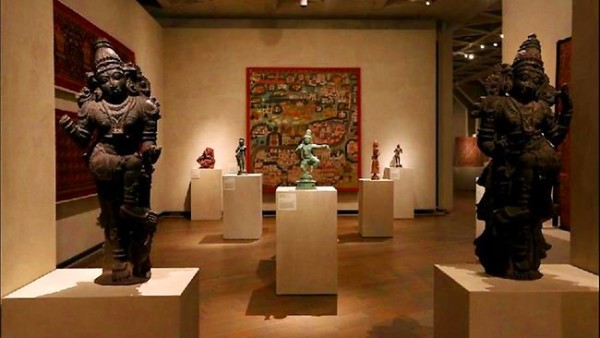 The Indian Gallery at the National Gallery of Australia in Canberra.

Navdeep Suri, India’s High Commissioner in Canberra, has praised the National Gallery of Australia for strong leadership and a collaborative approach researching its Indian antiquities. Speaking for the first time about the scandal that engulfed the NGA in 2012 and led to it implementing an exhaustive review of all 5000 Asian antiquities in its collection, Suri says his government is “fairly open to different kinds of solutions” to the complex problem. “The current management at the NGA are very open to collaboration, so for me the important thing is we’ve got this productive dialogue and a very collaborative spirit,” he says.

Researchers from the Canberra gallery went to India late last year to check antiquities from their collection against records held by the Archaeological Survey of India and philanthropic French Institute Pondicherry, which since the 1950s has sought to comprehensively photograph India’s historic sites.

The huge archives held by these bodies have over the decades helped prove stolen antiquities were in situ before India signed the 1970 Convention on the Means of Prohibiting and Preventing the Illicit Import, Export and Transfer of Ownership of Cultural Property.

The High Commissioner says India definitely wants the return of anything illegal that made its way to Australia.

As for the problem of where they return to, he will leave that to India’s National Museum and Archaeological Survey. He says he’s committed to ending the “tragedy” of cultural pillage.

“It is a tragedy but Australia is a very small part of that tragedy,” he says. “The greatest number is by far found in the United Kingdom and Europe and elsewhere.”

Australia was the first country to relinquish antiquities acquired from disgraced dealer Subhash Kapoor, an example that has since been followed by Germany, the US and Singapore.