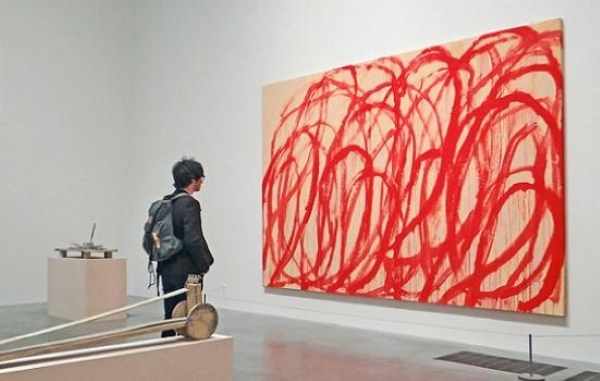 Photo of a visitor at Tate Modern. Photo: dalbera on Visual Hunt/CC BY.

New research will compare data on areas such as cross-visitation and dwell-time at some of England’s largest cultural institutions, including Tate and the British Museum.

Some of the largest museums and galleries in England are to gain access to a new tool to help them compare their visitor experiences to those of other attractions.

A consortium of 18 organisations, including the Tate group of galleries, the British Museum and Imperial War Museums, has contracted market researchers DJS Research for a major project that will assess visitor experience, satisfaction and attendance over the next four years.

The organisations hope these “robust and predictive” insights will help them “better understand audiences in an increasingly challenging competitive climate”.

The consortium, which also includes The Horniman Museum and The Wellcome Collection, formed around nine years ago, aiming to conduct rolling visitor research as a way of benchmarking activity.

Elliot Simmonds, Associate Director for DJS, said that the new research would focus on visitor experience and satisfaction, cross-visitation between partners and dwell time – particularly among different sub-groups. He added qualitative research would be used to “delve deeper” into any questions raised in the fieldwork.

As the leisure, tourism and even retail sectors are competing with the cultural sector for people’s time, DJS will compare the consortium figures with data from these sectors and include a non-visitor element to the study. It will encompass both those who are and are not visiting the museums and galleries in question, and also assess the experiences of online-only visitors.

The institutions will also gain access to the MoVE tool – short for Measure of Visitor Experience – that DJS is due to launch later this year, which will allow direct comparison between consortium members and visitors to other venues.

The announcement has parallels with Arts Council England’s new tool to measure the quality of artistic work, the Impact and Insight Toolkit – formerly known as Culture Counts.

This has prompted a significant backlash from the sector over concerns that this research reduces artistic quality to a statistic, and will add cost but “not a great deal of value”.

DJS said that while ACE’s initiative is “a great tool”, its own tool is not based on it, and stressed there are no formal links between ACE and DJS. Simmonds added that, as most of the consortium partners are nationally funded by the DCMS, some of the insights will feed into the institutions’ relationship with the department.