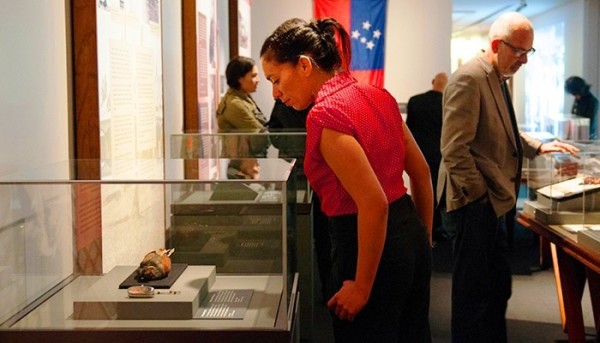 Visitors to exhibition in Auckland.

In 2014, Auckland War Memorial Museum produced the exhibition ‘Entangled Islands – Sāmoa, New Zealand and the First World War,’ to tell the story of the shared WWI history between Sāmoa and New Zealand. The exhibition was developed by the Museum along with leading Sāmoa historian, Assoc. Professor Damon Salesa of the University of Auckland.

Auckland Museum has gifted the exhibition to the Museum of Sāmoa where it will be on long term display. Auckland Museum Director Roy Clare said that this is a great opportunity to be able to work collaboratively to share an important history.

“This is the beginning of a special friendship between Auckland Museum and the Museum of Sāmoa, and we are privileged to be able to share this exhibition with the people of Sāmoa, helping to provide a richer understanding of our shared history.”

‘Entangled Islands: Sāmoa, New Zealand and the First World War’ was Auckland Museum’s first exhibition in a series commemorating the WWI centenary. Using the many perspectives and experiences of those involved, ‘Entangled Islands’ tells the lesser-known story of New Zealand’s first action in WWI, the occupation of then German Sāmoa.

New Zealand’s annexation of Sāmoa occurred when a NZ defence force party landed in Apia on 29 August, 1914 and claimed the islands from Germany. The event has different significance for Sāmoans, New Zealanders, Germans and others who were living in Sāmoa. Sāmoa gained independence from New Zealand administration in 1962, in which the two countries signed a Treaty of Friendship – the only such treaty New Zealand has.

The Museum was fortunate to have assistance from Sāmoan language writers and translators Muliagatele Vavao Fetui and Melegalenu’u Ah Sam to translate a large part of the exhibition to Sāmoan. The Museum has also benefited from the support of their Pacific Advisory Board, who offers on-going guidance for how the Museum can contribute to Pacific Island culture and communities.

“This partnership between Auckland Museum and the Museum of Sāmoa is part of the growing institutional socio-cultural relationship between our two countries, which will add a richer dimension to the identities of both nations and their communities”, says Marilyn Kohlhase Chair of Auckland Museum’s Pacific Advisory Group.

Positions Vacant » View All
» Exhibition Experience Developer – Te Papa
» Operations & Science Centre Mgr – Otago Museum
Latest News » View All
IWM unveils second world war & Holocaust
galleries – 7 year project Read more.
Indigenous cultural heritage ‘at risk’
until new protection laws pass Read more.
MA Museums Change Lives Awards
2021 Shortlist announced Read more.
Tattooing as a cultural phenomenon & art
form – historic & current challenges Read more.
Oriel College’s retain & explain plaque for
Cecil Rhodes statue – what’s balance? Read more.
Top +
Council of Australasian Museum Directors, c/o Ms Daryl Karp, Museum of Australian Democracy at Old Parliament House PO Box 3934 Manuka, Australian Capital Territory 2603 Australia, © CAMD 2021
Copyright: All information and resources provided on this website remain the copyright of the Council of Australasian Museum Directors. Permission is granted for viewing and downloading for personal and not for profit purposes. Those wishing to reproduce any materials for commercial, educational or other uses are requested to contact us.
Disclaimer: The content of this website is provided for information purposes only and is not intended as a substitute for professional advice. No claim is made as to the accuracy or authenticity of the content of the website. The Council of Australasian Museum Directors does not accept any liability to any person for the information or advice (or the use of such information or advice) which is provided on this website. The information on our website is provided on the basis that all persons accessing the site undertake responsibility for assessing the relevance and accuracy of its content. No responsibility is taken for any information or services which may appear on any linked web sites. Hostgator.
.