You are here: Home » Articles filed under: 'News' » Article: 'Eric Gill’s Prospero & Ariel at the BBC'

January 20th, 2022 | Browse other: News. | Tagged with: Prospero and Ariel sculpture attack, Sometimes a statue is indefensible – the BBC should get rid of Eric Gill | 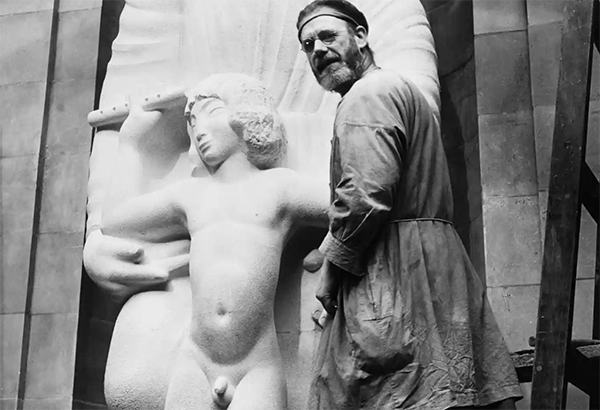 Eric Gill with his Prospero and Ariel sculpture in 1932. Photograph: Hulton Deutsch/Corbis/Getty Images.

Catherine Bennett, Sometimes a statue is indefensible – the BBC should get rid of Eric Gill,

Its response to the paedophile artist’s vandalised work is highly misguided.

Perhaps bravely, the BBC is making a drama series about Jimmy Savile, exploring how its former favourite managed a double life as a star and paedophile, dying before being unmasked in an ITV documentary.

Savile’s victims have, it’s reported, been involved in a production likely to show how his extraordinary status, giving him opportunities for years of attacks, derived from a doting state broadcaster. The series will inevitably remind audiences how BBC executives subsequently suppressed their journalists’ attempts to expose his crimes.

Given this historical but probably indelible association with one of the UK’s most infamous paedophiles, it’s unfortunate the corporation’s flagship building should still double as a monument to another notorious British pervert, Eric Gill. Last week, Gill’s most famous public sculpture, Prospero and Ariel, was badly vandalised in front of an audience including various police officers and spectators from the BBC.

In hindsight, the BBC may be wondering if it could have done more to protect a sculpture that is so public, so accessible and so controversial. Maybe by using protective wire, like Cecil Rhodes at Oriel College, with a similarly contextualising, Oliver Dowden-mollifying plaque. “Retain and explain”, according to the former culture secretary, is the correct way to reconcile a statue’s critics with the object of their understandable revulsion. Although it’s hard to see, as with the Edward Colston statue, what inscription would answer here. Gill’s work ornaments a key national building. What, in his case, justifies continued public display of a piece whose revised but still monumental message is “made by a famous child abuser”?

As for the “leftwing snowflakes” who, according to Dowden’s successor, Nadine Dorries, enjoy “tearing down statues”, does that define everyone who recoils from Gill’s behaviour and, along with it, his work? Like the nude studies of the daughters he was raping? To complicate matters, the way Gill harmed these children belongs, thankfully, to no tradition sacred to earlier generations, not in 1933, not in 1633 or 1033.

As for the ‘leftwing snowflakes’, does that define everyone who recoils from Gill’s behaviour and, along with it, his work

After last week’s distressing but not wholly surprising attack, the BBC informed the public that Shakespeare’s Ariel “as the spirit of the air, was seen as an appropriate symbol for the new dawn of broadcasting”. Supposing this notion ever really worked – the novelist Penelope Fitzgerald pointed out that Ariel was a liar, “pretending that someone’s father had died full fathom five, when in point of fact he was safe and well” – metaphorical difficulties seem unlikely to have provoked the vandalism. Though it’s a reminder that Two Little Boys was once a sweet song loved by Margaret Thatcher.

“The BBC,” the statement continued, “doesn’t condone the views or actions of Eric Gill. Clearly there are debates about whether you can separate the work of an artist from the art itself. We think the right thing to do is for people to have those discussions. We don’t think the right approach is to damage the artwork itself.”

But who thinks the BBC does condone Gill’s offences or that damaging his artwork is a great idea? There’s no response, however, to a reasonable proposal that it be moved, given that survivors have called its current prominence an insult, mocking, “intolerable”. With the further difficulty, in this specific case, of separating the artist from the art being elevated. At least one art critic has reported feeling “aesthetic revulsion” from Gill’s sculptures, including Prospero and Ariel.

It was carved in 1932, with Gill adding to a Tempest theme he seems never to have grasped some godly content of his own. For Gill, religion and sex were indivisible (“we are fucked by Christ, and bear children to him”). Both the sculptor and the statues created a stir, in relation to Ariel’s penis size, but nothing approaching the reaction when, in 1989, his biographer, the late Fiona MacCarthy, disclosed that the pious Gill was a child abuser. There were diary entries, previously ignored, in which Gill recorded furtive sexual encounters with two of his daughters, as well as with his dog. Though women of all ages were targeted by the married Gill, a superficially droll figure in his monk’s habit and “girdle of chastity”.

And some criticisms of his Ariel were probably not, it emerged, vexatious. Gill liked causing trouble. He was also, MacCarthy found, phallically obsessed. His own dimensions were scrupulously recorded, sometimes with female assistance. In one tract, Trousers & the Most Precious Ornament, the saintly penis liberator rails against modern containment: “All sidewise, dishonoured, neglected, ridiculed and ridiculous – no longer the virile member.” Gill was certainly blessed in both his biographer, since MacCarthy did not allow his “strange urge for the sordid” to qualify her appreciation of his work, and in the timing of these revelations, not long before Savile was knighted.

Being inflicted long before survivors began to be heard on what had been done to them by priests, by teachers and inside children’s homes, and before the evidence of Savile, Gary Glitter and Rolf Harris, Gill’s initial reputational damage was strikingly limited. Even 10 years later, a Guardian obituary of one of Gill’s daughters could depict the incestuous rapes, since these could hardly be ignored, as paternal encouragement: “He introduced Betty and Petra to the mysteries of sex and recorded the occasions in his diaries.” Gill apologists liked to stress that neither girl had publicly complained of abuse. But their father, keeping it secret, was in no doubt. “This must stop,” he wrote.

Outside the BBC, Gill’s abuse is finally catching up with his artistic legacy. Save the Children is going to stop using his typeface Gill sans. The Ditchling Museum of Art + Craft, in which Gill’s work is central, is committed to showing his work without separating it from his abuse.

A still greater sensitivity, given the feelings of survivors about its far more prominent collection, might have been expected from the BBC. Instead, in an uncanny echo of Savile, it seems again to be struggling with plain sight.

See also: Eric Gill: can we separate the artist from the abuser?