It is time to meet Australotitan cooperensis, a new species of giant sauropod from Eromanga in southwest Queensland. Australotitan, the ‘Southern Titan of the Cooper’, named from where it was found, has been scientifically described by palaeontologists and staff at Queensland Museum and the Eromanga Natural History Museum. The fossilised skeleton was originally nicknamed ‘Cooper’ after the nearby Cooper Creek where it was first discovered by the Mackenzie property owners and excavated with Queensland Museum in 2007. Finding ‘Cooper’ has changed the lives of the Mackenzie family and has led to the establishment of the Eromanga Natural History Museum. 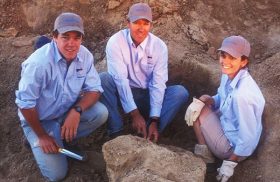 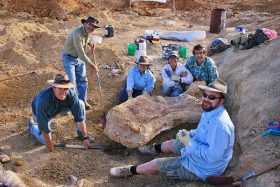 The team excavate the pelvis of ‘Cooper’ on the 2007 dinosaur dig. Image Credit: Robyn Mackenzie.

Australotitan belonged to a group of dinosaurs known as the titanosaurians, which were the last surviving group of long-necked sauropods and the largest known land-dwelling animals to have ever existed. Australotitan is now the largest known dinosaur species from Australia, making it the largest land animal to have ever walked in outback Queensland and sits within the top 10 to 15 largest dinosaurs in the world. It is estimated to have reached a height of 5 to 6.5 metres at the hip and length of 25 to 30 metres – as long as a basketball court! It may have weighed anywhere between 23 and 74 tonnes, the equivalent of 1400 red kangaroos! 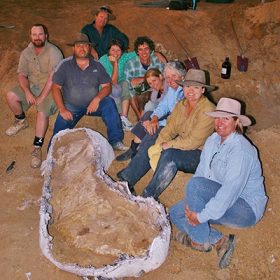 The team with the jacketed femur of ‘Cooper’ on the 2007 dinosaur dig. Image Credit: Robyn Mackenzie.

The study found that all four of the sauropod dinosaurs that lived in Australia around the same time (96 to 92 million years ago) were more closely related to one another than they were to other dinosaurs found elsewhere. To check Australotitan was a different species, its’ bones needed to be compared with the bones of other species in Queensland and globally. Not exactly an easy task when dealing with fragile and very heavy bones that are kept in museums 100s to 1000s of kilometres apart. For the first time, the team used new digital technology to capture each bone in 3-D and compare them to the bones of its closest relatives. Many of these digital ‘cybertypes’ will form part of Queensland Museum’s digital collection powered by Project DIG, a partnership between Queensland Museum Network and BHP. 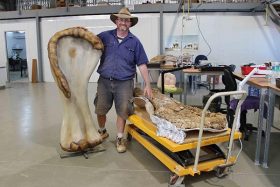 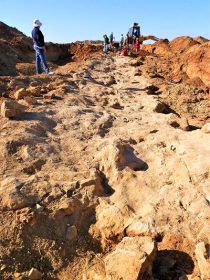 The sauropod trample zone discovered during the excavation of ‘Cooper’ in 2007. Image Credit: Dr Scott Hocknull.

The digital capturing process has also led to some remarkable discoveries. It has been found that several of ‘Cooper’s’ bones were crushed by the footsteps of other sauropod dinosaurs. This can be seen in a sauropod trample zone found during the excavation of ‘Cooper’. The team found a rock-shelf, almost 100 metres long, representing a sauropod pathway. The footprints of sauropods have been preserved trampling through the mud and even the bones of another smaller sauropod in the soft ground. This work has been forming fascinating studies in dinosaur trace fossils around Queensland. 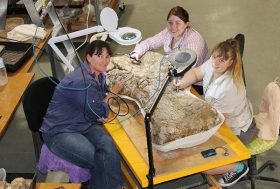 Stay tuned for more behind the scenes stories of Queensland dinosaur discoveries!

Project DIG is a partnership between Queensland Museum and BHP that will scan our collections and digitise our research for people worldwide. 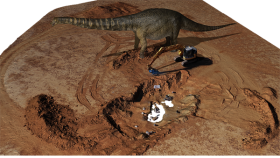