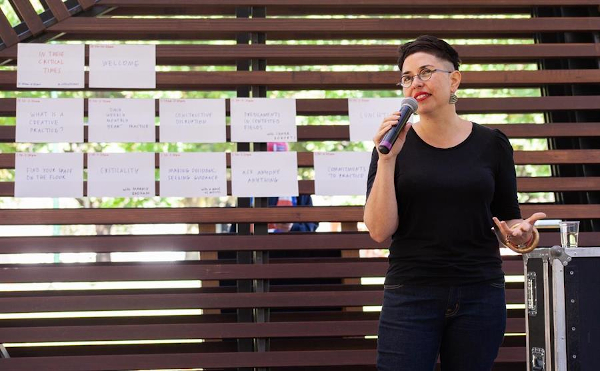 After three years as Executive Director, Esther Anatolitis is moving on from the National Association of the Visual Arts (NAVA). Here she reflects on challenges, triumphs and the opportunity for new thinking.

In a surprise announcement, Esther Anatolitis – NAVA’s bold, bubbly, passionate, political and red shoe-wearing Executive Director – has announced she will be moving on from the peak national body for the visual arts in August.

Her reason was simple. Her contract was up. ‘I believe leadership needs to be dynamic, and at this moment of reflection, I look into the future rather than hold on to now. One of the best ways dynamism continues within an organisation is to step aside,’ Anatolitis told ArtsHub.

NAVA is set to embark on its next strategic planning cycle. ‘It is so important to bring people together and do that visioning, and ask how we are going to raise the bar. Now is very much a time of reflection – critical reflection – I have always espoused that for leadership, and to infuse it within a team is critical.’

Anatolitis described the past three years with NAVA as ‘extraordinary!’ She joined the organisation in September 2017 after five years as Director, Regional Arts Victoria (2012-17).

At the time she told ArtsHub: ‘Art asks questions, and demands that we do the same. Whether we’re advocating for the space and time to devote to a practice, the rights to your own work, the ethics of diverse expression, or the national framework that best sustains and propels the entire sector, advocacy for the arts is a conversation we all need to power. Together.’

Reflecting with her today on that journey, she said: ‘As I look back, it’s those three strong pillars: strengthening artistic practice, amplifying the voice of artists and strengthening the sector that have defined my time.

‘Individuals, institutions, governments – I have witnessed them all stepping up, and they are really seeing the role they can play,’ she added.

Anatolitis acknowledge that our changing world of the last few months has been tough.

‘If we cast aside the negativity of the pandemic and economic crisis, this is also a time of massive cultural change – we have been seeing powerful voices where they need to be – it’s really heartening,’ said Anatolitis.

A MASSIVE LIST TICKED OVER THE PAST THREE YEARS

One of the achievements that Anatolitis is most proud, is that NAVA now has three First Nations board members, as well as a set of industry connected and very ethical approaches.

She told ArtsHub: ‘I look at the global change happening now, how we are championing First Nations peoples, and are getting really serious about diversifying our leadership, and getting used to having a conversation and where we see ourselves as having agency.’

NAVA Chair, James Emmett listed some of those achievements in salute to Anatolitis: ‘The introduction of our First Nations Engagement program, the Code of Practice review, and frequent state-based and national Member events such as Future/Forward [and Arts on the Hill], are all important achievements that strengthen NAVA.’

Under Anatolitis, NAVA has also re-established the Artists’ Benevolent Fund to support artists in need, securing major donors at this time when support is most needed.

The membership has always been core to her vision.

‘It has been heartening seeing our membership grow; it has doubled under our General Manager Penelope Benton. Our membership offerings have become clearer and stronger, and we are seeing great demands across the country in terms of sector development,’ said Anatolitis.

Benton will step in as  NAVA’s Acting CEO until the end of February 2021.

WHY ADVOCACY IS IMPORTANT, MORE SO NOW THAN EVER BEFORE

Anyone who follows Esther Anatolitis is witness to her drive for advocacy and policy. She has the blood of a diplomat in her veins and the passion of a revolutionary in her belly to fight for the betterment of artists and the visual arts sector.

‘Our members have come to expect that – our advocacy voice as an organisation,’ she told ArtsHub.

‘Advocacy, and being an advocate as an everyday practice, is incredibly important,’ said Anatolitis. ‘All of us as humans, as artists, as citizens need to find ways to engage with the decisions that affect our lives.’

She says that trends and reports of the past few years point to a general distrust in governments, and that memberships to political parties are in decline, as is the interest in broadcast news and the media.

‘In this post-truth world, when we don’t trust elected members it is easy to disengage, but when we disengage we give them more power,’ said Anatolitis.

‘When you look at the current situation of arts policy – where there is no arts policy – the decisions that support the arts industry, and the creative future of all Australians, we need to imagine together. Developing that policy literacy, and to see advocacy working in the arts sector, in media and in a political dimension, is so critical.’

She believes the only way through the drone of political conversations, is to escalate those conversations and bring them home – to invite your local member to your studio.

‘Our Minister for the Arts needs our support, so that when he goes to his front bench his colleagues know [the pressures] – that they have heard them from within their electorate.’

Anatolitis continued: ‘What I have found with Arts Day on Hill last year, and talking with the sector, is that our politicians are not engaged with issues in arts and culture – the conversations are not happening. There are thousands of us employed in the arts; we need to use our voice in honest and authentic ways to build critical mass.

‘As an advocate  my aim is not to change the mind of every politician; it is about planting the connections so they make those changes themselves,’ she added.

Professionally, Anatolitis said there are number of things that remain challenging.

‘It is really disappointing when public investment is decreasing, and you can see how difficult it is for people to meet best practice obligation…. The other is when these politicians realise the sheer power of quality of the arts – like it is a stark and clear realisation – when the arts are used as political football and manipulated to score a headline.

‘It is gut-wrenching when the average income of an artist is just $18K a year, and you see headlines that questions how public money is being invested in the arts’, said Anatolitis.

While no one has a crystal ball on how to solve this endemic and embedded thinking, Anatolitis remains optimistic.

One of the legacies that Anatolitis has left NAVA, is a job yet to be completed – to go through revisioning of the organised in it next strategic planning process, and to deliver the Code of Practice.

‘NAVA is now faced with the question, not what is next strategically but rather what is the next leadership model? That is a great organisational challenge. What I have seen grow, is the expertise and impact in the commitment of the people I work with,’ she added congratulating her team.

And on a personal level, Anatolitis added: ‘I come from migrant family and I still find it challenging that my Greek parents, don’t really understand what it is that I do,’ perhaps fuelling her passion for greater sector visibility, advocacy and diversity.

ADVICE ON HOW TO MANAGE THE DARK DAYS 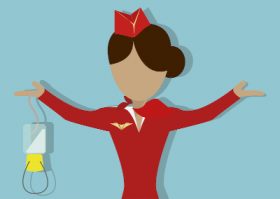 In terms of wellness in the workplace, Anatolitis said she was ‘a huge advocate fitting your own oxygen mask before helping others.’

If you emailed Anatolitis on a Friday you would get the message: ‘I work extended hours Mondays to Thursdays, devoting Fridays to my practice. About NAVA’s Quiet Fridays.’

It is this kind of brave changes that are signature to Anatolitis time as Executive Director, and changes that leave a legacy of thinking beyond the organisation.

She added: ‘My default understanding of my body is it requires ongoing care …and at a time like this – a time of emergency and isolation – it is so important to stay connected with each other.’

‘One of the worst things we could be doing is to get into that terrible “hunched shoulders mindset” of just getting down and doing things to get through. What we are called upon to do at this time, is to open up the horizon, and be in a position to see that big position. We need to stay connected and take time for critical reflection,’ reminded Anatolitis.

Anatolitis has long been a huge advocate of, and has a number of, active mentors, some outside the arts, and draws on them in structuring her work practice. She has also worked tirelessly to bring greater cohesion across the entire arts sector, forming the National Visual Arts Roundtable, the National Executive Directors’ Network, and Arts Day on the Hill.

Reflecting on her management strategy at this cusp of moving on, she told ArtsHub: ‘One thing in my calendar every week is LW/NW – a half hour slot to reflect upon what I achieved this week and what next week looks like. It’s not just diary checking, but about taking a few breaths – to  reflect on what I could have done better, on a meeting or conversation that I didn’t perceive that correctly, or should I have worked on that written piece more.’

Next on the cards? Anatolitis will take a well-earned break, with an announcement of her next move in September.

Anatolitis’ last day at NAVA will be Thursday 20 August 2020.