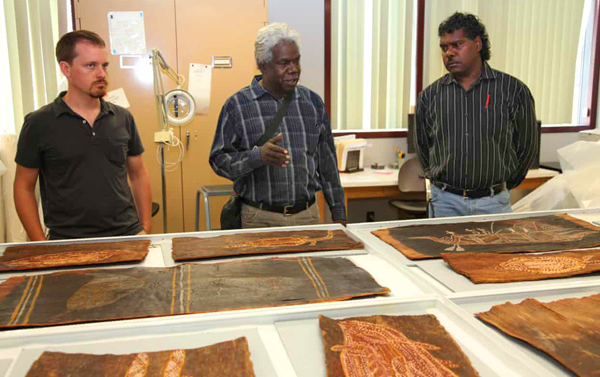 A sensitive documentary shows the theft and eventual return of human bones to Arnhem Land.

Early next month when the documentary film, Etched in Bone, is screened for the small west Arnhem Land Aboriginal settlement of Gunbalanya it will be almost seven decades to the day since an expedition of American and Australian scientists stole the remains of community elders and dispatched them to Washington.

The film, produced by historian/writers Martin Thomas and Béatrice Bijon,chronicles one of the most recent and deplorable episodes in cultural theft from – and scientific deception of – Indigenous Australians.

In recent years more and more light has been shed on the shameful trade that existed, almost from the time of European invasion until halfway through the 20th century, in ancestral human remains stolen from traditional burial grounds and medical institutions.

Thousands of anatomical “specimens” – preserved heads, skulls and various other bones, complete skeletons, internal organs and epidermis – were dispatched to medical institutions and museums across the world. The continuing official process of finding and repatriating them to country began late last century.

Etched in Bone brings the remarkable insight and sensitivity of Thomas, a multi-award-winning historian and writer – now film-maker – to the profound cultural impact on one Indigenous community touched by the 1948 American-Australian scientific expedition to Arnhem Land. In inviting the film’s narrator and writer, Thomas, and his cinematographer, Adis Hondo, to film the repatriation of the bones and the traditional funerary practises associated with their burial, the elders of Gunbulunya have bequeathed a remarkable transcultural insight into the spiritual imperative of reconnecting ancestral remains with their country.

Thomas, an associate professor of history at the Australian National University, first came into contact with the legacies of the 1948 expedition in 2006 when studying sound recordings of Aboriginal song in the archives of the Australian Broadcasting Corporation. The archives included recordings made with a now obsolete Pyrox recording machine at Gunbalanya in the final days of the 1948 expedition, which had also spent time at Groote Eylandt and Yirrkala, in north-east Arnhem Land.

“For several weeks in 1948, the men from the ABC carted this machine around the Arnhem Land settlement of Gunbalanya [then known by its mission name, Oenpelli]. They recorded everything from the riotous choruses of corellas and magpie geese to the sacred proceedings of an initiation ceremony,” Thomas says.

“At that stage, I had only vaguely heard of the American-Australian scientific expedition to Arnhem Land, a large interdisciplinary research venture which was nearing its final days … the material was used in a feature program, aired in late 1948 by the national broadcaster. As my research progressed, I would learn much more about the 1948 expedition. Tracking the expedition story, I went to the Washington archives of National Geographic and the Smithsonian Institution [which, together with the Australian government, sponsored the expedition].”

He came across the theft of the bones from Injalak, the sacred plateau that hosts cave galleries for rock art and artefacts that, for many thousands of years, have also been an ancestral ossuary for the remains of the dead. The Australian government had for some time been aware of the Smithsonian’s holdings of bones stolen during the expedition. While the Smithsonian had agreed to repatriate its holdings of American Indian remains, it was refusing to give back the stolen body parts of Indigenous people from other continents.

Thomas wrote in detail about the theft and repatriation of the Australian remains in his elegant essay, Because it’s your country: Bringing Back the Bones to West Arnhem Land, winner of the 2013 Calibre prize.

Now, using archival film and stills juxtaposed with interviews and footage of the 2011 repatriation and burial of the bones, Thomas sheds further light on the events of 70 years ago.

Central to the narrative is Jacob Nayinggul. He is in his 60s when Thomas first meets him and by the time the bones are returned he is wheelchair-bound and ailing (and always physically mesmerising on film). The bones are returned to Gunbalanya wrapped in tissue paper, packed in cardboard boxes. Nayinggul oversees the process of unpacking them, applying each with red ochre before wrapping them in paperbark and overseeing their burial in two big pits on the edge of the settlement.

The boxes are burnt; not so much a pyre for the repatriated as an incineration of the spirit of the theft of the bones from community seven decades back.