You are here: Home » Articles filed under: 'News' » Article: 'Ethical consumers and the museum'

Ethical consumers and the museum 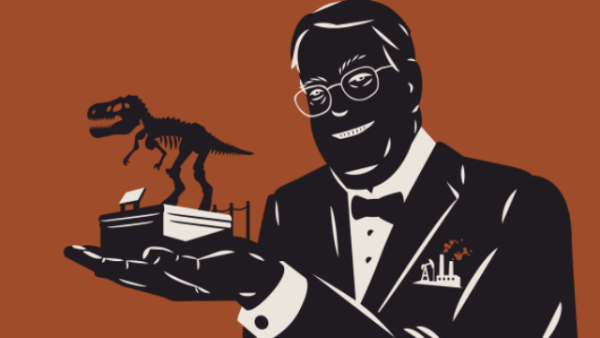 Center for the Future of Museums (USA) What Do Ethical Consumers Expect of Museums? 24 March 2015

An open letter released today calls on natural history and science museums to “cut all ties with the fossil fuel industry and funders of climate change obfuscation.” The letter, signed by scientists and by one former museum trustee & director, cites the AAM Code of Ethics for Museums, the preamble of which touches on the obligations of our field to preserve the world we have inherited for posterity, and to maintain museums’ integrity “so as to warrant public confidence.”

The letter was organized by a pop-up, mobile museum—The Natural History Museum—that debuted at the Queen’s Museum last year in conjunction with the People’s Climate March in New York City. That museum questions whether museums like the American Museum of Natural History (AMNH) and the National Museum of Natural History have softened their message on climate change as a consequence of receiving significant gifts from billionaire David Koch (who also sits on the board of AMNH)—a concern reiterated in the letter’s text.

Don’t be complacent, reading this post, if you work at an art museum or a children’s museum. The larger takeaway is that we live in a time when museums can’t take public confidence for granted. As I wrote in TrendsWatch 2015, nonprofits aren’t exempt from the ethical lens being brought to bear on the world, and museums can’t take for granted that people think we are the good guys. Those signing this letter believe that museums, as mission-driven nonprofits, should take a stand on climate change, and this stance echoes larger trends shaping nonprofit behavior. Nationally, we see universities and other nonprofits engaging in fossil fuel divestment. Union Seminary characterized the act of pulling their investment from fossil fuels as “a bid to atone for the ’sin’ of contributing to climate change.” In the U.K., Liberate Tate has staged a series of interventions protesting the ties between cultural institutions and the oil industry.

All of which leads to legitimate pressure on museums to examine how their governance, policies and behavior is consonant with their mission and values, and then communicate their choices to the public. But you can agree with the premise of the letter (museums have a responsibility to be trusted sources of information about climate change), without agreeing on the solution.  As Chris Norris, past president of the Society for the Preservation of Natural History Collections, wrote in a post on his blog, Prerogative of Harlots,

“There are those that say that Koch, as “one of the biggest funders of groups that deny or misrepresent climate science and biggest contributors to climate pollution” has no place in the leadership of an institution like AMNH. But as I look at the challenges facing us, I wonder whether it isn’t exactly the opposite. If museums like AMNH can’t accommodate someone with Koch’s views on their boards without compromising their message, aren’t we basically proving what the Lamar Smith’s of this world would have people believe – that we have abandoned any semblance of impartiality in favor of outright advocacy? My – perhaps naive – belief is that if AMNH, or any other museum for that matter, has a strong, honest, principled stance on the content of its programs, it should be able to resist the attempts of any board member, however wealthy or powerful, to push those programs in directions that contradict the weight of evidence. It’s better to have them at the table than to exclude them and prove Smith and his congressional allies right.”

As with so many controversies that rock our field, the underlying message is actually good: people care about museums and what we do. People see museums as playing an important and influential role in education, equipping our society to work through difficult issues like climate change (or racial justice, or economic equity, or a host of other tremendously important issues). But there is a range of opinions on how to live up to that responsibility. Some people want museums to be agents of change, proactively taking the lead in what they feel needs to be done to save the world. Others prefer museums to be neutral platforms for debate, trusted places where the community can come together to hash things out. (It’s difficult, if not impossible, to do both—museums may have to choose whether they will play the role of facilitator or that of advocate.)

And this process of deciding what is right and good never ends—because our social and cultural views on what a company, for profit or nonprofit, should address changes over time. Ethics issues that are now considered crucial were not mainstream concerns of the public in the past. I touch on a few of these in TrendsWatch: animal rights in the production of art; the collecting of natural history voucher specimens; keeping large mammals in captivity; working conditions of migrant workers building museum expansions overseas; unpaid internships. Or, per this letter, climate change.

But the underlying concern expressed in the missive is age-old, and shaped much of the current standards for museums: how to draw appropriate lines between those who fund museums and those who execute the programs, or between the governing authority and the staff. Museum professionals reading the guidelines for individual donor support may not remember that standard was prompted by the “Sensations” exhibit at the Brooklyn Museum in 1999. While the public may have been more focused on the controversy over Chris Ofili using elephant dung in a portrait of the Virgin Mary, the museum world was appalled by the level of control that the lender, Charles Saatchi, played in the development of the exhibition, and the way in which his financial support and influence were obscured.

The museum field responded by creating a framework to guide the complex balancing act of firewalling intellectual integrity while honoring the contributions of those who make museums possible through their time, experience and money. That framework includes core elements that can guide museums today as they face new ethical concerns, elements that include loyalty to mission, public trust and accountability, transparency and attention to potential conflicts of interest. Whatever role a museum chooses to play: advocate or facilitator, activist or neutral arbiter, the key to retaining public trust is letting daylight into the decisions. As the standards on donor support point out, the bedrock of public accountability is a full and frank discussion of the issue, both with the public and amongst museum professionals.

You can be part of that discussion at the upcoming AAM annual meeting in Atlanta: The Natural History Museum will park their mobile museum bus in MuseumExpo, and encourage attendees to come, discuss, argue, and hash out the issues raised by their call to action. Stop by, weigh in, and help shape our field’s response to emerging challenges in the 21stcentury. I look forward to hearing what you have to say, in comments on this post, via social media and on AAM’s Museum Junction.