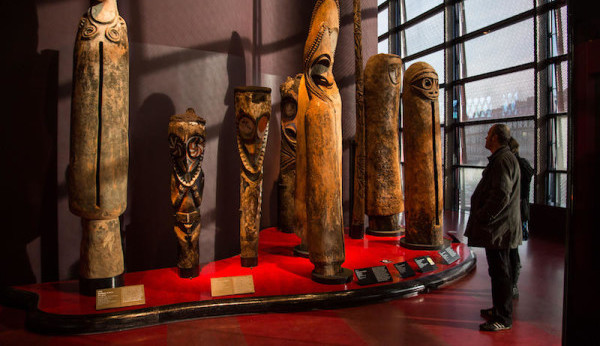 Nicholas Thomas, We need ethnographic museums today – whatever you think of their history, Apollo – The International Art Magazine, 29 March 2016

Over the closing decades of the 19th century, specialist museums of a new kind were established in European capitals and university towns: Berlin’s formidable Museum für Völkerkunde in 1873, Paris’s Musée d’ethnographie in 1878, and nearly simultaneously in 1884, the Pitt Rivers in Oxford and the Museum of Archaeology and Anthropology in Cambridge. In due course there would be counterparts across Europe. But if the distinctively anthropological museum was an innovation of the period, collections of artefacts from around the world were not; from the 17th and 18th centuries they could also be found in royal collections and in the Ashmolean and the British Museum, among many other museums of antiquities and natural history.

Sometimes together with, and sometimes separated from, the arts of Asian, pre-Columbian and ancient ‘civilisations’, holdings of African, Oceanic and native American art and artefacts were dramatically enlarged in the late 19th and early 20th centuries, as the collections of travellers, missionaries, colonial officials, and professional fieldworkers were brought together. Intermittent enthusiasm on the part of scientific societies and governments funded major expeditions, which brought back great canoes, magnificently-painted house-façades, awe-inspiring totem poles, as well as relatively more portable masks, ritual assemblages, textiles, personal ornaments, weapons, and many other things from every part of the inhabited world. These collections are truly vast. Made up of hundreds of thousands of objects, in many institutions they are complemented by equally extensive photographic and documentary archives, which illuminate the original settings, and the cultures from which artefacts were drawn. Surely, then, these museums’ collections ought to be seen as extraordinary lenses upon human history, cultural diversity, and creativity.

From the 1970s onwards, however, responses to this question were often sceptical. Perceived as warehouses of colonial loot, ethnographic museums were charged with divesting non-Western works of the significance they once carried, in the heat and dust of ceremony, in the movement of dance or oratory, on the bodies of their former owners, in the flow of life. Among commentators and curators, there was much argument regarding approaches to display, too. The respective merits of exhibitions which sought to present ‘context’ and those which drew attention to the aesthetic qualities of works became repetitive. Either way, the ethnographic museum appeared flawed, illegitimate, and in retreat.