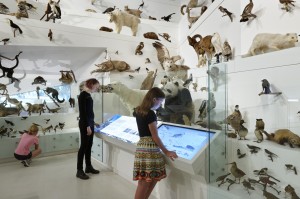 Visitors to Melbourne Museum in the Wild exhibition

The museum was awarded the 2012 Qantas Australian Tourism Award for Major Tourist Attraction, ahead of a strong field of nominees that included Sea World, Rottnest Island, Taronga Zoo and Kakadu National Park.

The award recognised Melbourne Museum’s success in 2010/2011, a year during which the museum saw 1,428,238 visitors come through its doors – its highest-ever visitation. Of that number, an impressive 538,194 were regional, interstate and international tourists.

“The year was one of major achievement for Melbourne Museum, as we provided both Melburnians and tourists alike, an outstanding program of exhibitions and activities for people of all ages – and of course, free entry for children and concession card holders.”

Dr Greene said Melbourne Museum’s innovative permanent exhibitions combined with internationally acclaimed blockbuster exhibitions such as Titanic: The Artefact Exhibition and Tutankhamun and the Golden Age of the Pharaohs had made it the country’s most popular museum.

“And now, Melbourne Museum has been recognised as Australia’s best tourist attraction.”

Titanic: The Artefact Exhibition attracted 480,879 visitors, while Tutankhamun and the Golden Age of the Pharaohs last year became the most successful touring exhibition in Australian history with a record 796,277 visitors.

The Australian Tourism Awards are the tourism industry’s peak awards – recognising and promoting excellence in tourism.

Positions Vacant » View All
» Public Programming Specialist – Te Papa
» Procurement Manager – MAAS
Latest News » View All
Vale Terry Teachout – remarkable critic, biographer & playwright
- Washington Post’s obituary Read more.
6 really, really small (and really good)
museums around the world Read more.
Bendor Grosvenor’s idiosyncratic best
of art world 2021 Read more.
Dutch cultural instns reopen as nail salons
& gyms to protest unequal covid restrictns Read more.
Perniciously polarized democracies – where
next? - Carnegie Endowment for Intl Peace Read more.
Top +
Council of Australasian Museum Directors, c/o Ms Daryl Karp, Museum of Australian Democracy at Old Parliament House PO Box 3934 Manuka, Australian Capital Territory 2603 Australia, © CAMD 2022
Copyright: All information and resources provided on this website remain the copyright of the Council of Australasian Museum Directors. Permission is granted for viewing and downloading for personal and not for profit purposes. Those wishing to reproduce any materials for commercial, educational or other uses are requested to contact us.
Disclaimer: The content of this website is provided for information purposes only and is not intended as a substitute for professional advice. No claim is made as to the accuracy or authenticity of the content of the website. The Council of Australasian Museum Directors does not accept any liability to any person for the information or advice (or the use of such information or advice) which is provided on this website. The information on our website is provided on the basis that all persons accessing the site undertake responsibility for assessing the relevance and accuracy of its content. No responsibility is taken for any information or services which may appear on any linked web sites. Hostgator.
.