You are here: Home » Articles filed under: 'News' » Article: 'Exhibition Building to reopen' 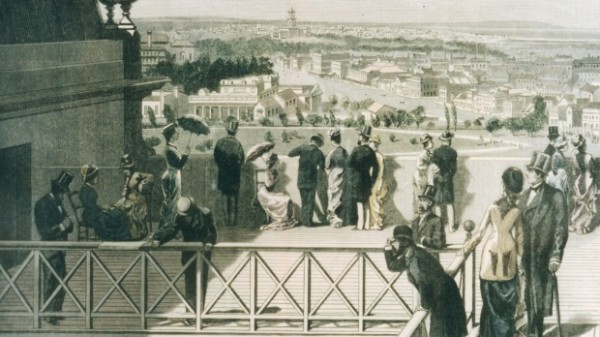 Shane Green, Marvellous Melbourne: A grand dome of our own, with a view to match, The Age, 16 August 2015

Closed to the public for more than a century, the dome on the Exhibition Building is being readied so visitors to return in 2017.

Richard and Maryann Pope and daughter Sara have spent an exhausting but exhilarating day at the Melbourne International Exhibition in the new Exhibition Building. Yet there is one more thing to see on this summer’s day in 1881: the view of Marvellous Melbourne from the dome.

For a threepence admission, they climb more than 80 steep steps to a promenade, the highest point in Melbourne.

This is what they would have seen. Government House, opened five years before, sits magnificently across the Yarra. Atop the city are Parliament House and the Treasury Building. The bay and coast are in clear sight.

“There is a grand view of the city,” Richard Pope tells us in his diary, “which well repays one for the trouble of climbing up the long stairs.”

Some 134 years later, we are following in their footsteps, climbing the same long stairs, worn shallow by countless visitors. And just like the Popes, the trouble is worth it: the view is still grand.