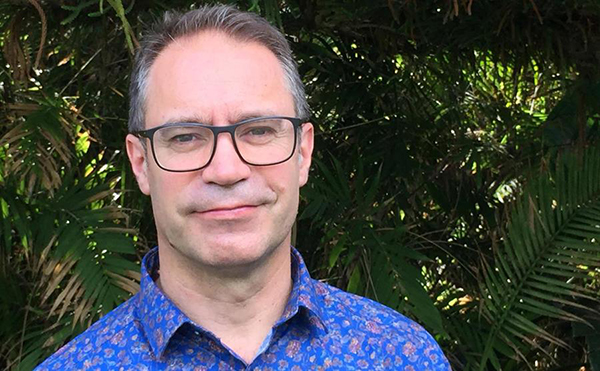 Shane Breynard has stepped down from CMAG. Image supplied.

After almost ten years at the helm of Canberra Museum and Art Gallery, Shane Breynard is stepping into a new career.

Stepping down as director of the Canberra Museum and Art Gallery (CMAG) has been a gradual process for Shane Breynard. He initially took leave last year to begin a PhD at Australian National University, but found himself being drawn into his research so much that he formally resigned in November 2019.

‘I am really enjoying the opportunity to dig deep into what is for me a fascinating research topic and to be a part of the research community at the School of History at ANU,’ Breynard told ArtsHub. He is particularly interested in how Canberra is portrayed in the moving image and the museum’s role, in changing ideas of nationhood.

‘Getting the thesis done is of course the main task, but I am also starting to think about some more creative, non-traditional, research outcomes that might result from it in the future. I am still very interested in how shared cultural experiences can change us and I hope my research will offer some new insight into the ways this can happen,’ Breynard continued.

Coming to CMAG in 2011, Breynard had a background as a visual artist and managing editor of Art Monthly Australia. But it was taking a less artistic route that led to the CMAG top job. ‘Immediately prior to working at CMAG, I had some valuable experience as a senior advisor and then chief of staff to Jon Stanhope, the former ACT Chief Minister … My wide portfolio in this role gave me an insight into how arts and cultural decisions were made in the political, government and community context of that time.’

CMAG itself is an amalgam of social history museum and art gallery, including the impressive collection of Sidney Nolan paintings. While Australia has few city-based museums (Museum of Brisbane and Museum of Perth are other notable exceptions), they are common in Europe and North America as reflections not only of where a city began and its evolution, but more importantly of the city’s current inhabitants.

Alongside art gallery exhibits like the climate-crisis requiem Hi-Vis Futures, CMAG hosts exhibitions based on the collections of ordinary people. The current Growing Up Optional exhibition flaunts a sci-fi collection of toys, dolls and action figures owned by Anneka Losik, who has been amassing her collection over 20 years. It follows a line of exhibitions that have included Doctor Who merch, snowglobes, wedding dresses and images of Canberra’s iconic bus shelters.

Breynard saw it as an important function of a social history museum to genuinely reflect the people of the city, from high art to popular culture. ‘It engages the history and creative life of Canberra and the wider Canberra region – from the Southern Highlands, to the South Coast and Snowy Mountains, and inland. CMAG isn’t a national institution, but Canberra is the national capital and an international city so these perspectives are always important to its work.’

Breynard’s tenure saw a number of milestones – the 20 anniversary of CMAG in 2018 and Canberra’s own centenary in 2013 – but over the period he saw the biggest shifts in the role of museums.

‘CMAG was just 13-years-old when I began my time there. I felt that there were opportunities to diversify its programs and its methods of engaging its community and its visitors,’ Breynard explained.

‘There had been big changes since the museum had opened: in Canberra’s demographics, how the city was being imagined, the character of its artists, and the expectations of its visitors,’ he continued.

Museums were changing throughout his tenure though. Another Canberra institution, the National Museum of Australia hosted their Encounters exhibition that included engagement with Indigenous Australians and consultation with 27 Aboriginal and Torres Strait Islander communities. In 2019 Australian Museums and Galleries Association (AMaGA) released their roadmap for encouraging more engagement in museums and exhibitions.

Breynard sees this as a seismic shift in museums. ‘They must now transform themselves away from being “treasure houses” of accumulated cultural artefacts, or of state-sanctioned souvenir cabinets, toward becoming places of collaborative custodianship, where objects are preserved for their significance to living cultures. Achieving a genuine dialogue with the authentic custodians of the objects and inheritances that fill our museums is now crucial to their future role,’ Breynard said.

Breynard sees many institutions taking up the challenge of being more inclusive of many different views. ‘Leading museums are already working more self-consciously in understanding themselves as sites of state power, and are beginning to open themselves to power sharing with the marginalised, with First Nations and with diasporic communities. These museums are discovering more authentic ways to engage with enduring but previously neglected or misinterpreted cultural groups and modes of expression, as well as with newly-formed and emerging voices.’

‘HAVING MY TIME AGAIN’

Leaving any job is always balancing how much you achieved against how much more you could have done. Breynard is tough on himself about being able to have done more.

‘Having my time again I would have acted earlier and more assertively to achieve a greater presence for and ongoing dialogue with First Nations Peoples at CMAG. Some progress has been made here and it remains important ongoing work,’ Breynard said.

CMAG’s latest annual report shows that progress as Breynard and CMAG have introduced a range of measures from hosting an Aboriginal intern to introducing an Indigenous Peoples’ engagement and participation plan.

The other aspect that Breynard would have liked to have improved was better representation for the ACT. He told ArtsHub, ‘I would also have advocated more aggressively to achieve proper representation for CMAG, and the Canberrans it represents, on Australia’s museum and art gallery leadership bodies.

He continued: ‘The Council of Australasian Museum Directors and the Council of Australasian Art Museum Directors are correspondingly made up of the heads of national, and state and territory level museums and art galleries. Tasmanians, through TMAG (Tasmanian Museum and Art Gallery), and residents of the Northern Territory, through MAGNT (Museum and Art Gallery Northern Territory), are represented, but not those living in the ACT. My inability to get CMAG represented on these bodies showed me that there are still parts of Australia’s museum sector that can be very slow to change.’

When asked about patterns in his career, Breynard recognises, ‘how cultural experiences can change us’ as a clear definer of his work. As he continues his research into how Canberra is portrayed and changing ideas of nationhood, he want to stay in touch with the cultural sector as a National Councillor with the Australian Museums and Galleries Association and as a member of the UNESCO Australian Memory of the World Committee.

Breynard believes in the transformative power of the arts and how they can shape our society. He said, ‘A flash-of-understanding of the times we are living in, and of how the political and social realities of our time live through us, can render us different and perhaps more competent both as persons and as citizens.’