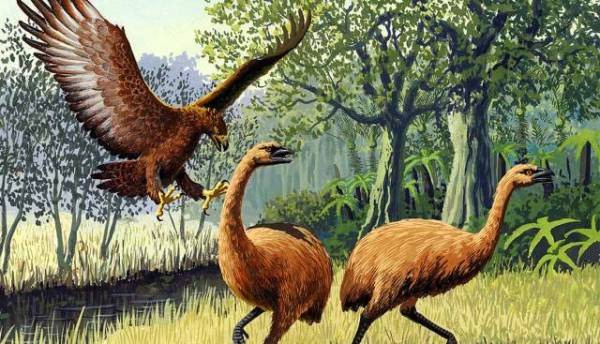 Some of New Zealand’s extinct bird species, including the Haast’s eagle, Forbes Harrier and a giant weka-like bird with a weaponised beak (Adzebill) are being brought to life as three-dimensional digital models thanks to staff at Massey University, the Auckland War Memorial Museum and The Museum of New Zealand Te Papa Tongarewa.

The skulls, along with several wing and leg bones, will be scanned at Te Papa this week. It is part of an on-going project between the museums to exchange collections and make them more accessible to the public.

This is not the first time Dr Thomas has digitised ancient bones. He has been working with Mr Froggatt to scan moa bones and build a full skeleton. They are showing their progress on a web page entitled Evolution in Isolation, which includes other three-dimensional digital models, wildlife photos and sound recordings from animals that live in New Zealand, from spiders to songbirds.

Dr Thomas says the recent trend of displaying three-dimensional digital versions of museum objects online has been supported by major museums internationally, like the Smithsonian Institution and the London Natural History Museum.

“We are going to see more of this in New Zealand. For a while now, researchers have used CT scanners to make digital versions of 3D bones, but few museums have this technology in-house. The 3D scanner we have is portable, so it can be brought into museum collections”.

Mr Froggatt is pleased to have new ways of showcasing their collections.

“This is a great example of collaboration between museums and universities, using new technologies to enrich collections and provide greater access to extinct fossils of New Zealand fauna.”

Mr Tennyson says this is an exciting project for the national museum to be a part of.

“Technology like 3D printing is the way of the future, and will help to ensure precious objects, like bones from long extinct birds, are protected while still being fully accessible to the public” he says.

In exchange for digitised versions of the birds, the team will be scanning fossils at Auckland Museum later in the year, to be sent to Te Papa.