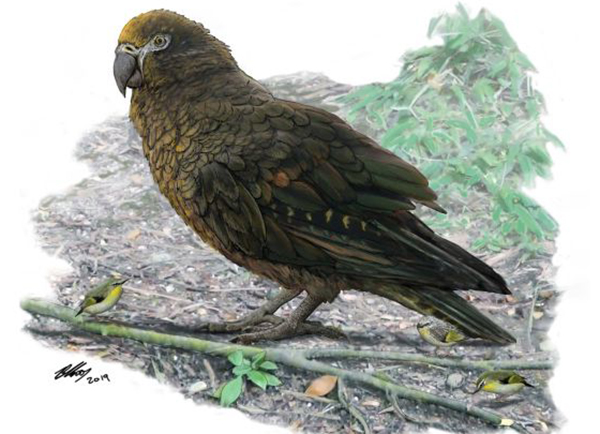 New Zealand is home to a bunch of feisty and unusual parrots, but none of them would have been a match for Heracles.

Around 19 million years ago, the screeches of this largest ever parrot would have rung out through the sub-tropical forests of what is now the South Island.

Dubbed Heracles inexpectatus after the Greek god of strength, it was a whopper of a bird.

Judging from its fossilised drumsticks, the parrot would have stood about 1 metre tall and weighed up to 7 kilograms, a team of palaeontologists report in the journal Biology Letters.

“It was totally unexpected to find a giant parrot,” said palaeontologist and lead author Trevor Worthy of Flinders University in Adelaide.

New Zealand is known to have had supersized birds such as moa, geese, cranes, eagles, and other islands like Fiji were home to giant pigeons.

But this is the first giant parrot to be discovered anywhere in the world.

“The kakapo is typically no more than 3kg and that’s considered extraordinary in the parrot world.

“So we’re talking about something more than double of that.”

Dr Worthy excavated two bird leg bones in 2008 at a fossil site near St Bathans in the Otago region, which he’s been visiting for the past two decades.

The fossil site is New Zealand’s only window into life on land as it went through rapid geological upheaval after the dinosaurs died out 65 million years ago up until about 1 million years ago.

Between 16 and 19 million years old, the fossil site documents a brief snapshot of time known as the early Miocene. 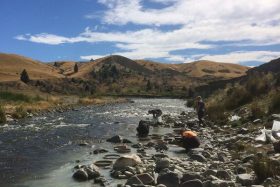 It is open grassland today but between 16-19 million years ago this area was a lake surrounded by lush forests. (Wikimedia commons: Nicrawlence)

“St Bathans fauna is the only site that tells us about the birds and the bats and things that were living on the land in that whole long period of time,” Dr Worthy said.

During the early Miocene, the climate was similar to north Queensland.

The area was a freshwater lake surrounded by lush forests filled with various species of fruiting trees, casuarinas, palms and cycads. And it was teeming with birdlife.

“We already know there were about 40 other birds in the St Bathans fauna,” Dr Worthy said.

“We have now got about 7,000 bird bones so this [latest discovery] is a very rare species in the fauna.”

Dr Worthy and his colleagues compared the two leg bones, each known as a tibiotarsus, to a range of bird species to pin down their owner.

“If you’re familiar with chickens … the long leg bones are the drumsticks.”

Even though the ends were missing, the shape of the bone shaft and position of scars marking where tendons were attached indicated the bones were from a parrot. 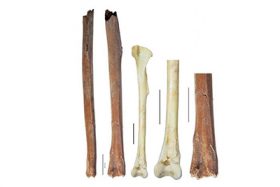 The leg bones of Heracles (brown) are a similar shape to, but much larger than, those of the kakapo (white) (Supplied: Trevor Worthy).

Its relationship to living parrots is still unclear but it is likely to have belonged to an ancient group of parrots unique to New Zealand that includes the kakapo as well as the kea (Nestor notabilis), and the kaka (Nestor meridionalis).

By comparing the leg bones of those of the kakapo they were able to work out the creature’s size and mass.

Heracles’ heftiness suggests that like the kakapo, it was likely to be a land dweller that used its beak to climb trees.

“The kakapo is totally flightless but it can still climb to the top of trees and climb back down,” Dr Worthy said.

“While [Heracles] probably spent much of its time on the ground it’s quite likely it could have clambered up trees to grab things.”

“At 7kg it’s not much bigger than a koala, and they can go out to the end of branches.”

The sheer size of the new discovery is remarkable, said avian palaeontologist Jacqueline Nguyen of the Australian Museum’s Research Institute.

there are still lots of new species and very interesting birds coming out of this site,” said Dr Nguyen, who was not involved with this discovery but has previously worked with this team. 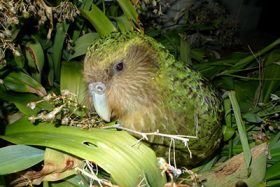 Giantism in New Zealand’s bird population likely evolved due to a lack of competition.

“New Zealand is the land of birds, there are not many mammals present so it’s possible these birds have taken advantage of these empty ecological niches taken up by mammals and they flourished and became larger,” Dr Nguyen said.

But, she said, this discovery was unexpected because giantism had never been seen before in parrots.

“We know that giantism has happened in other bird groups, but there doesn’t seem to be a clear pattern as to which types of birds will become gigantic on islands.”

Hopefully, she said, the researchers will be able to get a better idea of the giant bird’s relationships to living parrots when they find more fossil material.

That might take some time, but Dr Worthy is hopeful.

“It’s all about serendipity,” he said.

“A while ago I named one of the pigeons on a single bone we had, and then eight years later we got another bone of it.

“It happens, it just depends upon how long you are willing to wait.”