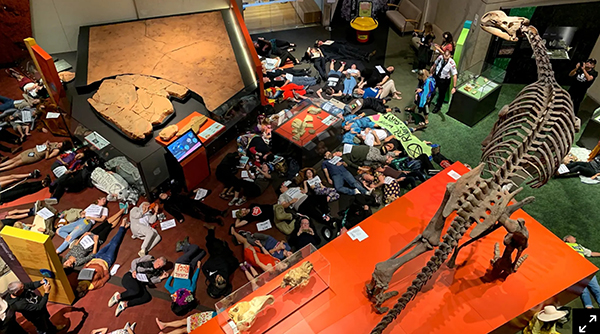 Environmental activists lie down during a staged “die-in” at the Queensland Museum in Brisbane. Credit: AAP/Natalie Bochenski.

About 250 environmental activists have lain down among the dinosaurs at the Queensland Museum in the first large Extinction Rebellion event in Brisbane.

Protesters, many dressed as endangered animals, on Sunday lay on the floor of the museum’s Lost Creatures exhibit amidst fossils and dinosaur reconstructions, including the state’s famous muttaburrasaurus. But one protester was arrested before the so-called “die-in” began.

After spending 15 minutes inside, the activists took their protests to the museum’s popular Whale Mall outside.

“This is a symbolic action to show that if we continue killing the planet we will die as well,” said Alice Wicks from Extinction Rebellion, a global network that protested for more than a week in London, leading to thousands of arrests.

“Scientists are telling us we only have within this next decade to act.”

Craig and Claire Walsh brought their three daughters to the event, inspired by the actions of teenage Swedish climate activist Greta Thunberg.

“She was 16 and doing something about it, so we took it on as a passion project for the family to get involved,” Ms Walsh said.

Annabelle, 10, said it was important for kids’ voices like hers to be heard.

“If we don’t change anything we’re doing and try to help save the world, then there won’t be a world to live on soon,” she said.

“They pollinate flowers and that’s how we have cucumbers and all the things in salad we need to keep us healthy,” she said.

Extinction Rebellion events have been held around the world as part of a global climate change movement, with rallies staged in Melbourne and Sydney in recent days.

The movement is calling for zero greenhouse gas emissions by 2025 in order to stop Earth’s sixth mass extinction event.

Ms Wicks said the local chapter was planning more and bigger actions in coming months, particularly focusing on the controversial Adani coal mine in Central Queensland.

Last week, Premier Annastacia Palaszczuk welcomed a series of approval dates for the Adani mine, released by the state’s coordinator-general, including a black-throated finch management plan by May 31 and a groundwater dependent ecosystem management plan by 13 June.

“It’s been really dodgy the way they’re trying to push this mine ahead,” Ms Wicks said.

Another Extinction Rebellion protester was briefly arrested before the “die-in” began.

Tom Howell, 29, was picked up by police for an alleged breach of bail over a protest on April 20, in which he suspended himself 10 metres off a railway bridge at Annerley used to transport coal.

A campaign has already raised the $1500 Mr Howell needs to pay his fines.

He was released about 1.30pm on Sunday once the protest had wrapped up.