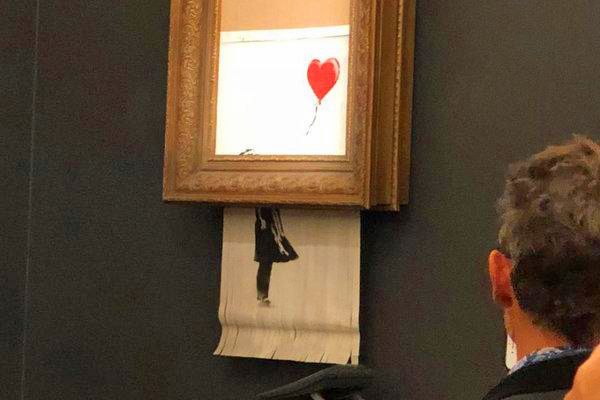 Banksy’s Girl with a Balloon appeared to shred itself after selling for $1.4 million at Sotheby’s on Friday night. Courtesy of Sotheby’s.

The British street artist and the auction house brought some calculated spectacle to the evening’s proceedings.

Sotheby’s managed to squeeze two sales and a prank into its Frieze week evening auction of contemporary art on Friday. The first sale consisted of 25 works from the estate of US management consultant David Teiger, all of which sold for a top estimate of £35.9 million ($47.1 million). A well-respected figure on the European circuit, Teiger bought new art from the leading dealers of the ’90s and the aughts—rarely, if ever, at auction.

Another German artist to attract competition was painter Daniel Richter, whose Jeans (2002) saw his European dealer, Thaddaeus Ropac, locked in conflict with several Asian bidders before falling to one of the latter for a triple estimate record of £442,000 ($579,904).

The selection Sotheby’s made for the London sale was understandably UK-centric, with seven of the top 10 most valuable lots being by British artists. Top of the list was Jenny Saville’s massive exercise in painting flesh—Propped—a naked self-portrait made when she was graduating from Glasgow School of Art in 1992. It was acquired shortly afterward for about £4,000 ($5,248) by Charles Saatchi, who took ownership of all her work in return for a free studio space and a stipend to live on.

After she became a star of the 1997 “Sensation” exhibition, she was signed by Gagosian from whom Teiger bought this painting. Tonight, it surpassed her previous record of £6.8 million—for a painting that sold to the Long Museum in Shanghai in 2016—selling for £9.5 million ($12.4 million) to an anonymous buyer relaying bids through Sotheby’s head of Impressionist and Modern Art, Helena Newman.

Following the Saville came an appealing David Hockney drawing of Celia Birtwell, the wife of fashion designer Ossie Clark, which was chased by London dealer Offer Waterman before selling on the phone above estimate for £298,000 ($390,976).

There was then a train of fashionable Brit art names from Peter Doig, Chris Ofili, Hurvin Anderson, Cecily Brown, and Glenn Brown, as well as a neon by Tracey Emin and a pot by Grayson Perry—which all sold mostly within estimates.

Unlike Christie’s, which segregated Italian art into a separate sale, Sotheby’s elected to include all of its Italian art in the mixed contemporary sale, thus ending a long tradition which it began in the ’90s. Reasons ranged from dwindling returns to the impact of the Teiger collection on the sales schedule to the desire to market Italian art within a global context.

The change has certainly come at a moment of reassessment in the booming Italian art market. Three of the most valuable works by Fontana, Castellani, and Manzoni were not sold and the highest-priced Fontana, which sold to US dealer Neal Meltzer for £2.9 million ($3.8 million), was on the low estimate.