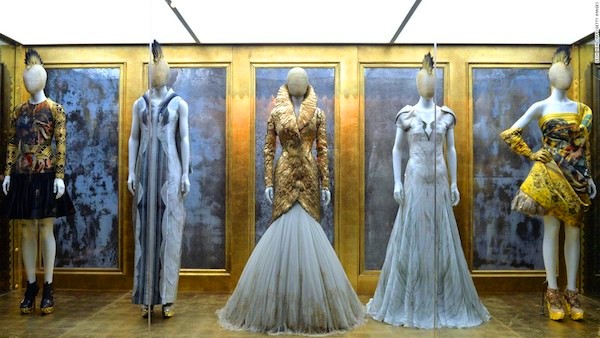 Amah-Rose Abrams, Why Are Fashion Blockbusters More Popular Than Art Exhibitions and What Can we do About It?, artnetnews, August 14, 2015

Savage Beauty, the exhibition of the late British fashion designer Lee Alexander McQueen’s work, drew record visitor numbers and critical acclaim on both sides of the Atlantic, attracting 1,154,552 visitors at the MET and V&A, combined.

Similarly, the exhibition China: Through the Looking Glass at the MET attracted record numbers of visitors and was extended due to popular demand. Over 500,000 visitors flocked to the show featuring the stunningly intricate and theatrical work of contemporary Chinese couturier, Guo Pei, alongside work influenced by Chinese aesthetics from Dior, Jean Paul Gaultier, and McQueen.

Another memorable recent blockbuster show is Matisse Cut-Outs, exhibited firstly at Tate Modern in London, then at the MoMA in New York, in 2014, which proved to be the Tate’s most popular exhibition ever, and was loved by critics and the public alike.

However, in terms of visitor figures and column inches it appears that when it comes to the blockbuster exhibition, fashion seems to capture the imagination of the public significantly more than art. But why? After all, many big-name designers contend that fashion is not art.

“Fashion for me is a creative endeavor but it is not art,” Tom Ford once said, and Miuccia Prada was quoted in the 2012 Metropolitan Museum’s show Miuccia Prada and Elsa Schiaparelli: Impossible conversations as arguing: “I always said, for me, fashion is not art.”

Taking things a step further, Karl Lagerfeld told the Telegraph in 2012, “I am against museums and exhibitions in fashion. One woman said to me—‘In my world, the world of art’—so I said: ‘Oh, don’t you make dresses anymore?'” Though the multi-tasking designer has clearly changed his mind since, and a show dedicated to his work opened in Bonn, Germany in March.

What does that say about our relationship to fashion if we are apparently fascinated by seeing it presented in museums?

We spoke to three of the top curators behind some of these shows to get their perspectives.