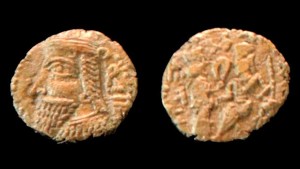 ISIS-looted artifacts confiscated by the FBI include this silver coin (obverse and reverse), possibly from the Parthian period. Source: FBI.

Antiquities looted by terrorist groups in Iraq and Syria are entering the art market, prompting the FBI to release a flyer soliciting dealers’ and collectors’ help in halting illegal trade. The one-page document, posted on the Bureau’s website Wednesday, specifically addresses art and antiquities market leaders, calling on them to spread a message of caution to all their associates as the US art market may be affected by such sales.

“We now have credible reports that US persons have been offered cultural property that appears to have been removed from Syria and Iraq recently,” Bonnie Magness-Gardiner, manager of the FBI’s Art Theft Program, said in a statement.

The flyer, titled “ISIL Antiquities Trafficking,” features a number of photographs of previously confiscated antiquities above a list of tips. The advice reminds dealers and collectors to remain wary when buying items from Syria and Iraq; it also states the legal ramifications of purchasing a looted artifact — which essentially amount to funding a terrorist group. The significance of cultural objects as currency to ISIS is especially evident after the execution of Palmyra’s former chief of antiquities, Khaled al-Asaad, who had refused to share information on the whereabouts of invaluable artifacts with the terrorist group.