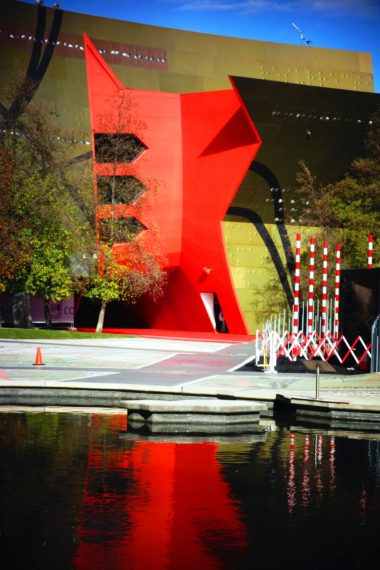 … The budget papers suggest the workforces of Canberra’s national cultural institutions will drop by about 63 full-time equivalent positions in 2016-17, with the National Library of Australia losing 28 positions in a move blamed in part on a decline in revenue from external sources.

…The National Gallery’s workforce will drop by 20 full-time equivalent positions, the budget papers show, while the National Film and Sound Archive will have 12 fewer jobs, as projected in the government’s mid-year budget update.

The National Portrait Gallery will have three fewer jobs while the National Museum of Australia’s workforce will grow by 11 full-time equivalent positions on average staffing levels next financial year. A single position will go from the Australia Council.

In March, the government revealed national institutions would be forced to deliver nearly $40 million of savings within four years, above earlier federal budget cuts.

The efficiency dividend has had operating costs of Canberra-based galleries, museums and libraries trimmed for nearly 30 years, despite bipartisan opposition and community concern. Already institutions have cut their expenses by $29.4 million since September 2013, when the Coalition government was elected.

The National Library and the National Museum were already on notice to find $14.7 million in collective savings by 2018-19. The Library has announced ongoing job and services cuts, in addition to a $1.5 million lost in the mid-year update.

The National Library of Australia’s online archive Trove will cease to add to its collection after failing to secure dedicated funding in this week’s federal budget.

Sue McKerracher, chief executive of the Australian Library and Information Association, said the news was a blow to local historians, humanities researchers and individuals delving into their family histories.

Trove was launched in 2009 and since has digitised millions of records from its own collection as well as items from state and local collections, placing them online for the public to access.

The budget estimates papers state the National Library will shed 28 staff as the result of a $20 million funding cut.

Library management had previously said that unless it was fully funded, it would cease aggregating content on Trove.

“Trove will continue but it will not reach its full potential because small museums and libraries and galleries archives who had not yet put their collections on Trove will have to find funding for that instead of it being free,” Ms McKerracher said.