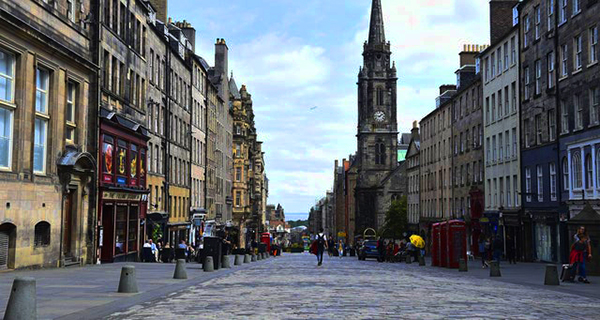 The Royal Mile has been eerily quiet over the last few weeks. Picture: Lisa Ferguson.

The number of people on the streets of the Scottish capital was down by two million in August without the city’s festivals going on compared to the same month in 2019.

A slump in international visitors, the absence of around 25,000 performers and a reluctance of local residents to travel into the city centre without any events to go to on are all thought to have played in footfall figures dropping from 2.7 million to around 700,000 in the space of 12 months.

The Edinburgh Hotels Association said the average occupancy was down to just 50 percent in August – at a time when they would normally be almost full.

The average price of a hotel room was just £76 – down 52 per cent on the same period in 2019 – as prices were slashed to try to drum up business. 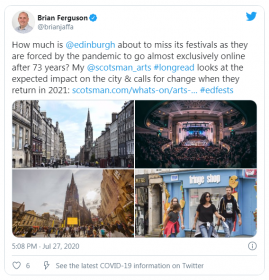 The new figures have emerged as organisers of the Edinburgh International Festival predicted they may have to rely on local audiences in 2021.

City centre leaders said the many businesses are now in “purely survival mode” as they also face the prospect of a further prolonged period without the city centre office workers.

However outlying areas are said to have been boosted by “shop local” campaigns on social media, huge numbers of people working from home and the popularity of the UK Government’s Eat Out to Help Out initiative. 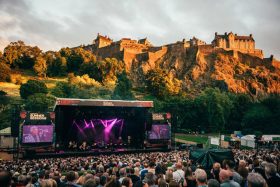 Open-air pop and rock concerts were among the events cancelled in Edinburgh this summer.

Roddy Smith, chief executive of Essential Edinburgh, the business group which monitors city centre footfall, said: “August and December are always the busiest months so it is not surprising the numbers are so heavily down considering the lack of festival activity as well as the significantly reduced number of tourists and office workers in the city centre.

“The majority of retailers and hospitality businesses are in purely survival mode and need the support of residents, workers and tourists. Although there are signs of recovery, it is going to be many months before the city returns to normal operations.”

Garry Clark, development manager at the Federation of Small Businesses, said: “City centre businesses have reported that the double whammy of the festivals cancellation and the lack of office workers has had a material impact, with trade at a fraction of normal levels for August.“By contrast, there are more encouraging signs reported by businesses in suburban areas, where increased home working seems to be having a more positive effect.”

Hotels association spokesman Russell Imrie said: “The very large drop in average rate at which each room was sold was much worse than expected and was a symptomatic of the large number of hotels trying to attract substantially reduced numbers of visitors.”

Louise Maclean, sales and marketing director at the Signature Pub Group, said: “Every Edinburgh-based hospitality business has missed the Edinburgh festivals this year but I’m not sure front-of-house staff, chefs and door stewards would necessarily agree with that statement as August traditionally is very hard work for them.

“For a while, back in the late spring, we weren’t sure if opening back up would be permissible by summer, so we were glad to even be trading by July and August brought with it the unexpected bonus of the Eat Out to Help Out initiative which really boosted trading levels.

“The city centre venues miss the office workers dreadfully and the lunchtime trade is particularly poor.

“The demise of the after-work pint and grabbing a bite in a bar spontaneously has, for the moment gone, and we would love that back – that will demonstrate progress in the fight against coronavirus and also bring greater positivity for the trade.

“Spontaneous hospitality, in general, appears to be a long way off and whilst we understand the reasons why and wholly support the measures to keep everyone safe, we do miss those days.”
Positions Vacant » View All
» Visitor Engagement Admin Officer – HTSA
» Learning Specialist – AWMM
Latest News » View All
AG Env Min Pliberseck backs World Heritage
listing of Parramatta Female Factory Read more.
NMA acquires historic colonial billiard table
illustrating Aust history in timber Read more.
AWM’s Nick Fletcher discusses tank warfare
& practical origins in The Battle of Cambria Read more.
The future viability of platypus populations
- fragmentation by major dams & implications Read more.
Ntl Geo on WAM & Shipwreck Hunters Australia
- why WA’s coast rivals the Bermuda Triangle Read more.
Top +
Council of Australasian Museum Directors c/o Mr Brian Oldman, South Australian Museum PO Box 234 Adelaide, South Australia 5001 Australia, © CAMD 2022
Copyright: All information and resources provided on this website remain the copyright of the Council of Australasian Museum Directors. Permission is granted for viewing and downloading for personal and not for profit purposes. Those wishing to reproduce any materials for commercial, educational or other uses are requested to contact us.
Disclaimer: The content of this website is provided for information purposes only and is not intended as a substitute for professional advice. No claim is made as to the accuracy or authenticity of the content of the website. The Council of Australasian Museum Directors does not accept any liability to any person for the information or advice (or the use of such information or advice) which is provided on this website. The information on our website is provided on the basis that all persons accessing the site undertake responsibility for assessing the relevance and accuracy of its content. No responsibility is taken for any information or services which may appear on any linked web sites. Hostgator.
.