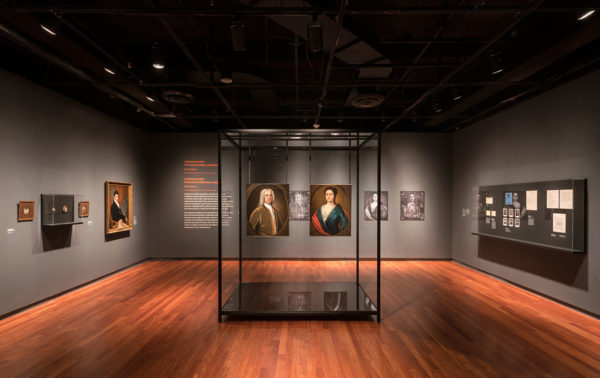 Seph Rodney, At the Jewish Museum, a Pair of Portraits Prompts Visitors to Think Critically About Collecting, Hyperallergic, 23 August 2016

The current exhibition at the Jewish Museum, Masterpieces & Curiosities: The Fictional Portrait, does a few remarkable things, perhaps the most remarkable being that it begins to turn the institution inside out, to make not only its collection available to the visitor, but also the policies and procedures that underlie how it augments and organizes its collection. In this moment of historical transition towards more experiential visiting, the museum has taken the progressive and enterprising step of making itself somewhat transparent to the visitor.

The story of the fictional portrait begins with the acquisition in 1957 of two important works that were believed to be the portraits of Judah Mears and his wife Jochabed Michaels, which were purported to have been produced by Jeremiah Theus, an American colonial portrait painter working in Charleston, South Carolina. Happenstance led to museum staff investigating their provenance more carefully than had been done initially: in 2007 a volunteer found a card from the seller Marie Ambrose, that mentions a Boston art dealer named Frank Bayley. This prompted more investigation because this note was the only documentation that accompanied the paintings and Bayley and several of his clients had apparently been duped by a forger named Augustus de Forest who had systematically misattributed paintings. Under examination they found that neither canvas resembles other works by Theus. To get more definitive proof, the museum commissioned an X-ray and infrared analysis last year. It revealed that the portraits were likely repainted and resized: the cracking is different between the two and they were painted using varying methods, very likely by different hands. Now the works have been renamed “Portrait of a Man” and “Portrait of a Woman” (date unknown) a precipitous fall in status that the museum plays out for the visitor.

What’s marvelous about this show is the willingness of the museum to let us in on the fact that they made a mistake and reveal how they rectified the misattribution of what they, in their press release, call “two key works” of their collection. The precise opposite of the typical PR maneuver, which would be to control the story, hide the details and place the most positive spin possible on it, this show makes visitors fuller partners in the museum, trusts us to appreciate the complex circumstances that shape the acquisition of artwork and the study of provenance. In short, it begins to treat the visitor like a compeer, rather than a consumer.