You are here: Home » Articles filed under: 'News' » Article: 'Field Museum of Natural History on poetry' 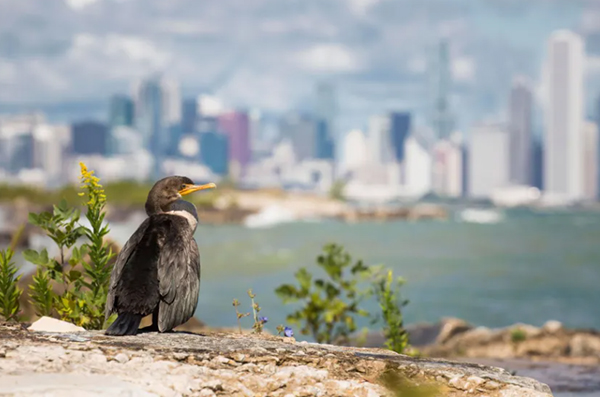 Eric Elshtain, the Field Museum of Natural History’s poet-in-residence, has written poems inspired about artifacts in the museum. A new exhibit featuring the poetry will be on display through April 2023. Provided.

Nine unique poems authored by Eric Elshtain are spread throughout the museum, displayed near the artifacts or exhibits that inspired the poetry. They will remain on display through April 2023.

Visit the Field Museum of Natural History on a Thursday, and you may see Eric Elshtain working on his newest poem.

The museum’s poet-in-residence since 2017, Elshtain picks a new spot in the museum to work each week – and often, Elshtain said the location he chooses may inspire his writing that day.

His set up is always the same. He sits behind a little desk with a typewriter. Drafts of unfinished poems lie next to him. Nearby, a sign reads, “ask me what I’m writing.”

And many people do stop to read his poetry and discuss their experiences at the museum, Elshtain said.

As a result of a new exhibit that opened Friday, visitors will now be able to read some of Elshtain’s poetry even when he is not present. Nine unique poems authored by Elshtain are spread throughout the museum, displayed near the artifacts or exhibits that inspired the poetry. They will remain on display through April 2023.

One poem, titled “Known by Bone: Ode to the Coelacanth,” is displayed next to a replica of the fish, one of the most endangered in the world.

Elshtain said he has always been drawn to the Coelacanth and has read books about the fish. He knew he wanted to write a poem about it.

Other poems came to him in more unexpected ways, Elshtain said, such as one titled “[the moment you connect].” It was inspired by an early visit to the museum, he said, during a visit with a geologist. Elshtain said he put on white gloves, and the geologist handed him a rock. He introduced the composition of the rock, and discussed its age and structure.

Then he told Elshtain he was holding a piece of the moon.

And it was in that moment of fascination, Elshtain said, that he knew he had to write about the experience. The piece is hung near the museum’s meteorite display.

Elshtain said he has always been interested in both poetry and science. Although most of his education focused on writing, he said, when he was younger he wanted to be a marine biologist. He never lost that fascination. After all, the two disciplines are in some ways very similar, Elshtain said.

“Both begin with observation, and both are in examination of our external and internal worlds,” he said. “The end results are different, as in how language is used – there’s a clear difference. But the beginnings are often quite similar.”

He said poetry can help visitors digest and make sense of the thoughts and feelings they may experience when going through the museum. They may have a question or idea but not know how to articulate it.

That’s why he makes a point to talk to guests who approach him. He asks them questions about the exhibits that interested them. What’s something that struck them? How did it make them feel? And as they talk, Elshtain writes their words down. He formats them into a poem, then prints it out and gives their words back to them.

“Some visitors have been quite moved by this gift,” Elshtain said. “It’s something very powerful.”