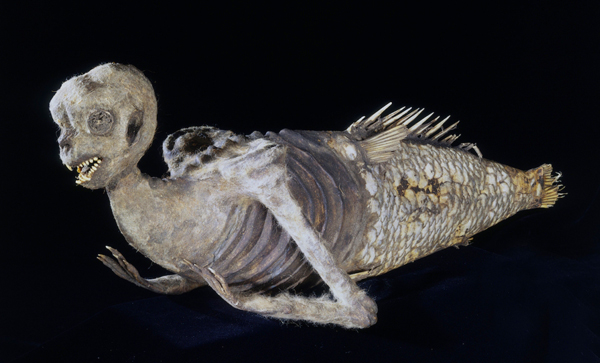 Feejee Mermaid (Gift of the Heirs of David Kimball, Peabody Museum of Archaeology & Ethnology, © President and Fellows of Harvard College).

Allison Meier, How a Fake Monster Crept Into our Museums, Hyperallergic, 15 January 2018

The Fiji Mermaid was an object of fantasy but for a long time it was on display as a specimen that many people believed was real.

Last summer while exploring museums in London, I encountered three different notorious fakes on display. Grotesquely combining a half-fish, half-mammal body, these Fiji mermaids crept among the authentic treasures of the British Museum, Horniman Museum, and Science Museum. I was curious how these monsters got into these major museums and, since, they’re almost universally recognized as hoaxes, why are they still on view?

Sometimes called Feejee mermaids, they are a far cry from the seductive sirens that you might imagine beguiling sailors. Aggressively ugly, they have expressions of exaggerated horror that recall Edvard Munch’s “The Scream”; their mammalian torsos are sometimes fuzzy with tufts of brittle hair. Usually they’re posed as if they’re crawling out of a nightmare, rather than swimming in an exotic sea. And they’re small, only about the size of a trout.

The appearance of the Fiji mermaid in 19th-century museums was in large part due to American showman P. T. Barnum. In 1842, a banner on his American Museum in New York advertised three bare-chested mermaids. Visitors inside were startled to instead witness a gnarled, mummified half-fish, half-monkey. Despite of, and perhaps because of, the shocking display, the mermaid was a huge success. In the 1855 The Life of P. T. Barnum, Written by Himself, the famed flimflammer related how he manufactured seemingly legitimate news coverage on this “veritable mermaid taken among the Feejee Islands” with reports he sent to friends that they forwarded to newspapers.

Yet Fiji mermaids existed before Barnum, albeit by other names. For instance, a 13th-century example is preserved in the Ryuguji temple in Fukuoka, Japan. As Swapna Krishna reported in an article for Smithsonian, in the 18th century this mermaid’s bones were soaked in water that was offered to bathers to protect them from epidemics. In the 1999 book The Feejee Mermaid and Other Essays in Natural and Unnatural History, Jan Bondeson describes how in Japan and the East Indies mermaids were often made by craftsmen or fishermen, “exhibited for money or used in religious ceremonies, and amulets with their likeness imprinted were sold. When the westerners came to Japan, the trade in faked mermaids was greatly stimulated.” Once Japan opened to wider trade in 1854, the ningyo, or “human-fish,” was more actively exported to Europe and the United States. Whatever original sacred purpose they had was distorted through myth, the name “Fiji” referencing the Fiji islands in the South Pacific giving an air of exoticism without any substance.

After Barnum, there was a flurry of mermaid making, with many ending up in museums. In the 1800s, museums were the dime variety packed with “freaks” and oddities as often as they were scholarly organizations of knowledge. In its 150th anniversary exhibition All the World Is Here: Harvard’s Peabody Museum & the Invention of American Anthropology, the Peabody Museum of Archaeology and Ethnology at Harvard University is exhibiting its Fiji mermaid.

“The mermaid represents a moment in time for the history of museums,” Dr. Diana Loren, co-curator of All the World Is Here, told Hyperallergic. “Museum documentation indicates that it came to the Peabody from the Boston Museum, which was established by Moses Kimball in the 1840s. The Boston Museum was a bit of everything: it included natural history, ethnographic, and Western art, as well as a theater and a wax museum. It was spectacle, curiosity, and science, and many of today’s museums were influenced by museums with this eclectic past that were meant to engage and educate multiple audiences.”

Their mermaid was part of that initial Boston Museum collection, and thus a relic of the emergence of the museum in the United States. “The mermaid also has a possible connection to P. T. Barnum,” Loren added. “In Barnum’s autobiography, he noted that he borrowed a mermaid from Kimball’s Boston Museum collection to exhibit as an actual mermaid. However, it’s not clear if the Peabody mermaid is Barnum’s Feejee mermaid.”