You are here: Home » Articles filed under: 'News' » Article: 'Fire of Australia opal' 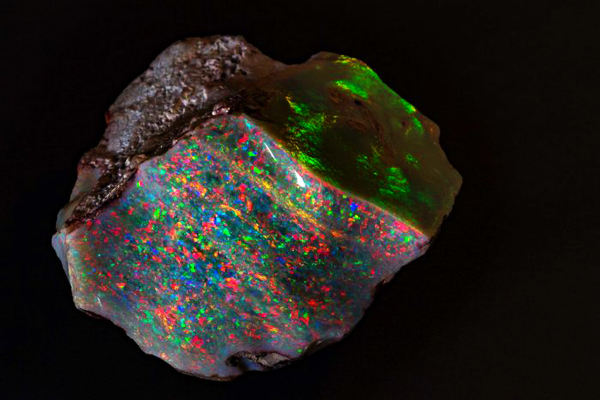 The world’s finest uncut opal, the Fire of Australia, has become part of the South Australian Museum‘s collection more than 60 years after it was discovered.

The 998-gram opal valued at nearly $900,000 has been on loan to the institution but will become part of the collection after a $455,000 grant from the Federal Government and the Bartram family.

Alan Bartram said his father, Walter, mined the Fire of Australia in 1946 at the Eight Mile field in Coober Pedy, South Australia.

Mr Bartram said his family, which has been in the opal industry for 80 years, was one of many who mined opals at the “prolific” Eight Mile field.

“At the end of the war all of the sons and siblings and greater families were all invited to come and join in this prolific field, which was absolutely exceptional and not very deep so they could do it with hand mining,” he said.

“Everybody that was there was successful, some to huge extent.

“It was just one of those brilliant experiences to be able to be involved in the Eight Mile at Coober Pedy at that time.”

Mr Bartram said while he could have fetched a much higher price for the Fire of Australia at international auction, it was important to him that it remained in South Australia.

“It is such a piece, so outstanding that it would have been a sheer misery to see it go to another destination and be cut up for watch faces or something like that,” he said.

“After loaning the Fire of Australia to the South Australian Museum for its Opals exhibition, we made the decision to place this family heirloom in safe hands.”

The exhibition was the most visited in the museum’s history.