You are here: Home » Articles filed under: 'News' » Article: 'First Nations photography, reframed ‘This is'

First Nations photography, reframed ‘This is

September 10th, 2021 | Browse other: News. | Tagged with: First Nations photography reframed, National Museum of Australia, Queensland Museum, This is who we really are exhibition | 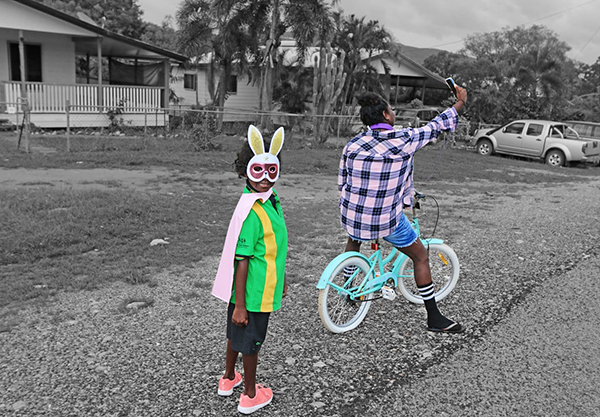 Kate Hennessy, First Nations photography, reframed: ‘This is who we really are’, The Guardian, 7 September 2021

A new exhibition is correcting the record in Queensland, contrasting staged historical photography with the vibrant present

Travelling north through Cape York, you can’t miss the tiny town of Coen; the main road runs right through it. If Coen Heritage House was your only stop you’d learn a lot about the region’s mining, cattle and police history – it was home to “the biggest gold rush in tropical Australia” a sign declares – but little about Coen’s 300 or so primarily Indigenous residents.

Among framed photographs of the early pastoralists’ properties and portraits of their owners are photos of Kaantju woman Naomi Hobson’s great-grandfather, great-uncle and great-auntie. The images were returned to her community by the National Museum of Australia “to put up proudly on display”, says Hobson. “But it’s not who we are.” 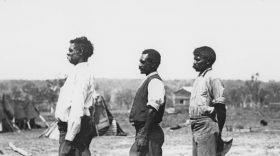 Hobson lives and works as a photographer, painter and ceramicist opposite the Heritage House. “I go in there and I think ‘the country never knew who they really were’,” she says. “That wasn’t the great-grandfather I know from the stories about him, he was more than that. It’s sad. They were big men, important men that held family together. And the women that brought my grandmother into the world and who created love and family.

“I feel a responsibility to say with my own photos ‘this is who we really are’ … from the perspective of a black person speaking with black people because Indigenous stories are best told by Indigenous people.” 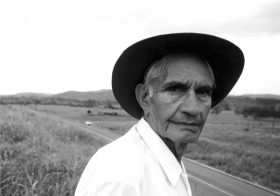 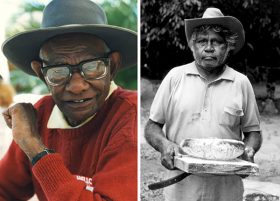 Hobson is one of three Aboriginal artists (with Michael Aird and Jo-Anne Driessens) whose photographs are contrasted with historical images of First Nations people in a State Library of Queensland exhibition called Viewpoints. On entering, the audience sees six photographs from the early 1900s, selected by Butchulla woman and curator Georgia Walsh from the library’s archive of historical photographs. 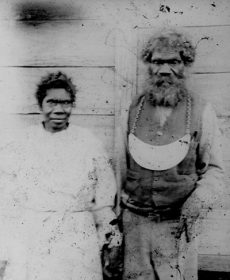 George of Saxby Downs with his wife at Barambah Aboriginal Settlement, 1909. Photo: State Library of Queensland.

It was a careful selection, she says. “You don’t look at them and think ‘oh, these poor people’,” says Walsh. “There is quite a bit of confidence in the subjects, even though they’re in compromised positions they still have this power about them that we tie through the rest of the exhibition.” The pictures “set the scene”, says Walsh, not only of how photos were taken then (“an Indigenous person might have walked into a studio in their work clothes and been told to undress and put on a grass skirt instead”, is one example she gives) but also of the photographs that dominate the bulk of the library’s collection.

“We wanted to address institutions like the library, and even museums, who have a responsibility to continue collecting and to avoid othering, as though Indigenous people don’t exist anymore,” Walsh says. “Continuing the collection at the library has been a big part of what we’ve talked about.”

Aird, a Brisbane-based artist, and researcher, has been delving into how Aboriginal subjects are framed by the camera since his landmark 1991 exhibition, Portraits of our Elders. Aird combined photos from Aboriginal family albums with those from museum collections in an exhibition so popular that it immediately secured funding to travel across Queensland and New South Wales for five years, later published as a book of the same name, exploring “the racial attitudes and ethnocentrism of the time”, wrote the publisher, Queensland Museum. 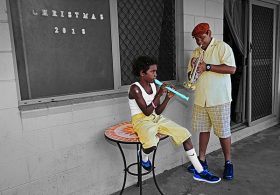 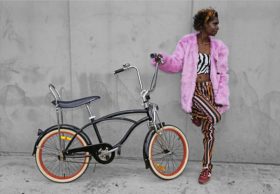 Aird hasn’t stopped since. He’s a photographer of some renown himself but his primary work is as a specialist researcher of historical photos of First Nations people, with his 2001 book Brisbane Blacks another landmark text. Driving his research is a hunger for individual stories. “Every single time I see an old photo of an Aboriginal person, I want to know their name,” says Aird. “I want to know everything about them. Quite often it’s impossible, but I do my best. That’s what I really spend my life doing.”

When asked why it’s important that Aboriginal people take photos of their own community members, Aird says: “I wouldn’t take that line. I think it’s not exclusively something only an Aboriginal person can do. I’d probably use the term ‘insider’. The way I take photos, well, I’ve always got a camera with me. And sometimes I just look at a person, and it’s often respecting the person I’m with, or the situation I’m in, and I think ‘I want to document this’. Nothing I take is staged.” 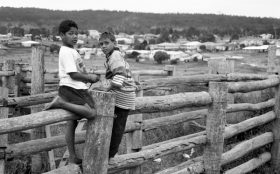 Boys in a cattle yard in Cherbourg, Queensland, 1998. 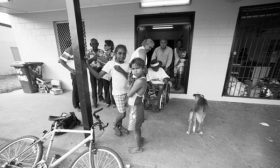 Way up north in Coen, Hobson’s insider approach is less candid in one crucial way. She lets her subjects – “young, black and deadly people” – direct the narrative. She’ll wait on the corner or at the general store and “just see who rocks up”, she says. Everyone knows her. “I’m their aunt, I’m their cousin, I’m a mother.

“The young people light this community up. The music they listen to, the way they dress. They’re community kids, bush kids but they see the world; they have a much broader sense of global culture than the generation before and the photographs show all that.

“I allow them to be themselves, not how our old people before were staged. They’re not going to take being misrepresented or generalised. I’ve been into that Heritage House but so have they, so have my young people. And they know exactly what they want their future to look like – not like that. Not anymore.”