You are here: Home » Articles filed under: 'News' » Article: 'Fishy finds in Auckland' 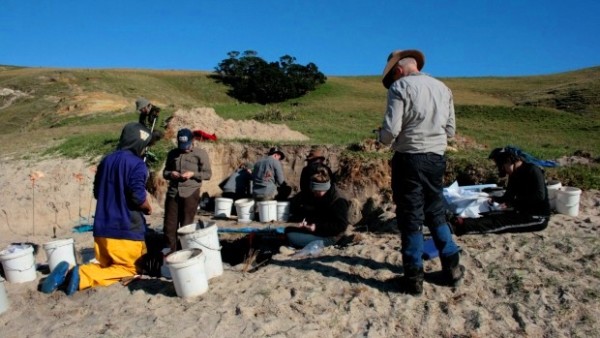 Researchers hunt for clues at an early Maori settlement on Great Mercury Island.

Moa-bone fishhooks and fossilised dog poos are amongst the treasures unearthed by archaelogists combing the remains of one of the oldest human settlements ever uncovered in New Zealand.

But the researchers warn that rising sea levels and accelerating coastal erosion mean the sites will soon be lost forever.

A team of researchers from the University of Auckland and Auckland Museum have found evidence of a small fishing settlement on Great Mercury Island – the private island owned by controversial richlisters Michael Fay and David Richwhite.

The village, in Coralie Bay is thought to have been inhabited by Maori as early as 1350AD, just 30 years after some estimates of the first Polynesian landfall in Aotearoa.

“It’s filling in the picture of how those early Maoris and Polynesians were using the coast.”