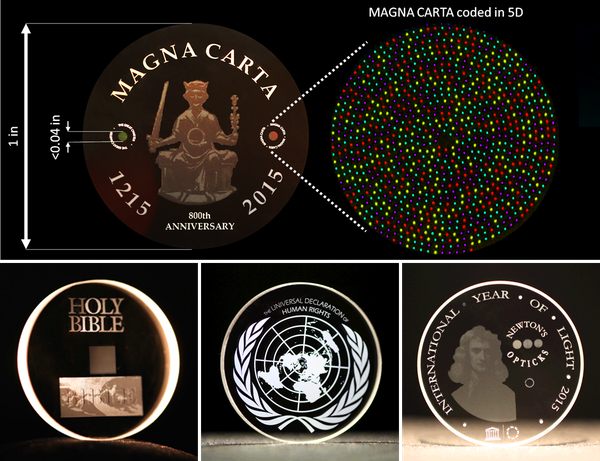 The one-inch discs used to encode new texts in 5D and a diagram illustrating the micron-sized dots (not to scale) which the nanogratings are stored in. (Image credit: University of Southampton)

James Vincent, ‘Five-dimensional’ glass discs can store data for up to 13.8 billion years, The Verge, 16 February 2016

Photographs fade, books rot, and even hard drives eventually fester. When you take the long view, preserving humanity’s collective culture isn’t a marathon, it’s a relay — with successive generations passing on information from one slowly-failing storage medium to the next. However, this could change. Scientists from the University of Southampton in the UK have created a new data format that encodes information in tiny nanostructures in glass. A standard-sized disc can store around 360 terabytes of data, with an estimated lifespan of up to 13.8 billion years even at temperatures of 190°C. That’s as old as the Universe, and more than three times the age of the Earth.

The method is called five-dimensional data storage, and was first demonstrated in a paper in 2013. Since then, the scientists behind it say they’ve more or less perfected their technique, and are now looking to move the technology forward and perhaps even commercialize it. “We can encode anything,” Aabid Patel, a postgraduate student involved in the research tells The Verge. “We’re not limited to anything — just give us the file and we can print it [onto a disc].”

In order to demonstrate the format’s virtues, the team from the University of Southampton have created copies of the King James Bible, Isaac Newton’sOpticks (the foundational text of the study of light and lenses), and the United Nations’ Universal Declaration of Human Rights, which was presented to the UN earlier this month. A new paper on the format will be given tomorrow by the team’s lead researcher, Professor Peter Kazansky, at the Society for Optical Engineering Conference in San Francisco.