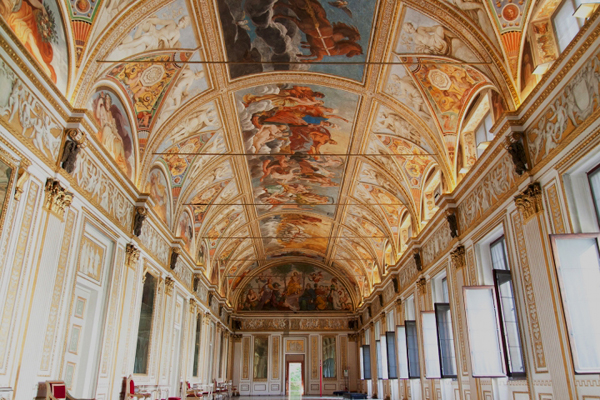 The interior of the Palazzo Ducale in Mantua (photo by Errem, via Wikimedia Commons).

Among other things, the regional tribunal in Lazio objected to hiring committees using Skype to interview distant candidates.

An administrative court in Italy voided the appointments of five museum directors on May 24, striking a startling blow to the country’s ambitious 2015 initiative to open competition for top cultural posts to citizens of other European countries. It’s unclear how permanent the firings will be, as Italy’s Ministry of Cultural Heritage and Activities and Tourism plans to appeal the decision handed down by the regional administrative tribunal for Lazio, the Associated Press reported. In the meantime, the ministry has named interim directors to manage the five affected institutions.

The court’s ruling was spurred by a complaint filed by two Italian candidates for the positions, according to the Telegraph. It found that the recruitment processes had not been sufficiently transparent and that, per the terms of an Italian law from 2001, foreigners were not actually eligible for the positions, according to the Art Newspaper. The court also objected to the fact that some of the candidates were interviewed over Skype.

“The world has seen Italian museums change in two years and now the tribunal cancels the appointment of five directors,” Dario Franceschini, Italy’s culture minister and a champion of the 2015 hiring initiative, said on Twitter. In comments to the Telegraph, he added: “I’m worried about how Italy looks to the rest of the world and about the practical consequences, because as of today important museums don’t have a director.”

The 2015 museum reform initiative saw the hiring of 20 new directors, including seven foreigners who took over some of Italy’s most prestigious cultural institutions. Eike Schmidt, a German, was appointed to lead the Uffizi Gallery; the Canadian-born Brit James Bradburne took the lead at the Pinacoteca di Brera; and the Frenchman Sylvain Bellenger became director of the Museo di Capodimonte. None of those appointments were affected by Lazio tribunal’s decision, though one extremely high-profile future cultural hiring could be. The Roman Colosseum is currently looking for a new director, with a selection expected by the end of the month according to the Art Newspaper, though it’s unclear in light of last week’s decision if international applicants will be considered.

Since 2015, the year of the Italian museum leadership reform, revenue from the country’s museums and archaeological sites is up 38%, according to the AP.