When did we start sharing art instead of looking at it? 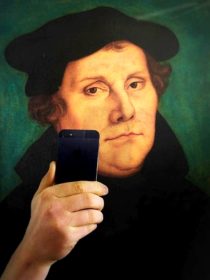 Last month, two men snapping selfies clambered on a 16th-century monument featuring statues of Hercules in Cremona, Italy, and severely damaged the priceless piece. It was not the first—nor the last—time that an artwork has suffered at the hands of an errant photo op. In 2014, a hapless young American became trapped within a large, marble vagina sculpture at Germany’s Tübingen University.

Meanwhile, stroll through a major museum, like I recently did, and you’ll struggle to avoid the scrum of iPhones blitzing away. At the British Museum in London, I tried but failed to grab a look at the Rosetta Stone, because of the mass of swinging hands aggressively thrusting selfie sticks and cameras flashing. One art-blocking shutterbug in front of the pack pressed their camera against the display cabinet, as her breath fogged the glass. The irony of a triumph of ancient civilization obscured by a 21st-century accomplishment was hard to miss.