You are here: Home » Articles filed under: 'News' » Article: 'Flinders (and his cat) get statues – so why'

Flinders (and his cat) get statues – so why 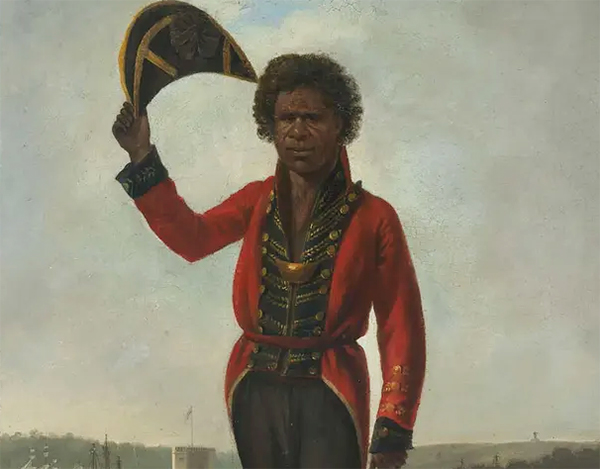 Paul Daley, Flinders (and his cat) get statues – so why not the Aboriginal man who sailed with them?, The Guardian, 6 February 2020

If we can spend $7m to commemorate a fictional Cook circumnavigation, Bungaree’s real one justifies a monument.

Since 1996 a statue of a cat has perched on a ledge outside the Mitchell Library on Sydney’s Macquarie Street.

The cat, Trim, together with Bungaree, an Aboriginal man, sailed with navigator Matthew Flinders (whose statue stands before the cat’s outside the Mitchell) on his 1801-1803 circumnavigation of the continent he named Australia.

In March, a replica of HMS Endeavour will begin a $6.7m circumnavigation of Australia to mark the 250th anniversary of James Cook’s voyage of discovery, when he became the first European to land on the east coast of Australia.

Incidentally, Cook never did circumnavigate Australia – and there is no official statue dedicated to Bungaree on Macquarie Street or elsewhere.

Which means something is very wrong with this picture.

It’s hard to know where to begin. Except to say the statue of Trim and the absence of any dedicated to Bungaree, and the spending of millions of dollars on a voyage by a replica Endeavour that Cook never actually undertook, brings into stark relief the ridiculous disparities in who we have come to publicly venerate and commemorate in Australia. 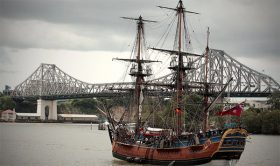 ‘Millions of dollars were spent on a voyage by a replica Endeavour that Cook never actually undertook.’ Photograph: Patrick Hamilton/AAP.

If Flinders and, not least, his cat, are deserving of statues on Sydney’s main commemorative street, it should go without saying Bungaree ought to be there too, in statuary, for all that he brought to that circumnavigation and the early colony of New South Wales. Such is the enduring colonisation of Australian national memory and commemoration – as well as history.

There is a small park in Sydney’s east, really just a green patch in the shade of towering eucalypts and palms, on a corner of New South Head Road near Cranbrook Grammar School, named Bungaree Reserve. It’s where Bungaree was buried after his death at 55 in 1830, as one of the best known – or infamous – Aboriginal men around Port Jackson.

Bungaree or “Boongarie”, besides being a seaman and tribal leader, was on close terms with several early governors including Lachlan Macquarie and Thomas Brisbane. At a time when the early colony’s pastoral frontier was creeping inexorably north and west amid increasing dispossession and violent encounters between Indigenous tribes, the settlers and redcoats, Bungaree was a diplomat of sorts – a bridge between the empire and his civilisation that had been around the port for tens of thousands of years.

Like Bennelong before him, much has been made in Australian historiography of Bungaree’s supposed capture between two worlds and descent into drunkenness (in a colony whose lifeblood was grog), ill-health and vagrancy. But other historians portray a man wise to the racial realpolitik of colonial advancement. Among them are Keith Vincent Smith, an expert on the Eora of the Sydney region and biographer of bother Bennelong and Bungaree.

Macquarie, who ordered several bloody punitive actions against the tribes around Sydney – including at Appin in 1816 where he used “terror” tactics to murder Aboriginal people resisting the pastoralists – set aside land for Bungaree and his people near present day Mosman and bestowed him with a boat for fishing and a breast plate inscribed, “Boongaree, chief of the Broken Bay Tribe”. A portion of the catch from his boat would go to the colonists, the rest to his people.

“As soon as any ship came through the Sydney Heads, Bungaree would arrive in his fishing boat, rowed by two of his wives. Dressed in an old military jacket, tattered trousers and his trademark hat, he climbed on board to welcome newcomers to ‘his’ country. Doffing his hat, bowing deeply and grinning widely, Bungaree would ask to drink the captain’s health in rum or brandy. He then inspected the ship’s pantry and levied his ‘tribute’, which he received in the form of ‘presents’ or ‘loans’,” Vincent Smith writes.

“A clever mimic, Bungaree could imitate the walk, gestures and expressions of past governors of New South Wales. Like Shakespeare’s clown in Twelfth Night, he was ‘wise enough to play the fool’ and used his humorous talents to obtain clothes, tea, tobacco, bread, sugar and rum for himself and his people.”

Historian Geoffrey Dutton viewed him as astute more than clown-like, writing: “He mocked the white men by mocking himself.”

All of this came after Bungaree’s voyages with Flinders (and Trim!) during which he acted as an emissary (even though he did not share their languages) to the other Indigenous people they encountered. He became the first Indigenous man – and the first Australian-born one – to circumnavigate Australia, although the voyages were also fraught and marked with tense and sometimes violent interactions with other Indigenous peoples.

He was often in considerable danger when communicating on behalf of Flinders and Phillip Parker King, with whom he sailed 15 years later to finish charting sections of the continental coast that weren’t completed during the circumnavigation.

Bungaree spent the last months of his life ill and malnourished, before his death – among his people – at Garden Island.

While many colonial and visiting artists painted portraits of Bungaree (the best-known is probably Augustus Earle’s, held by the National Library of Australia), in death he was, it seems, afforded less dignity. There is evidence his body was exhumed, decapitated and his head sent to the Australian Museum, which had been involved in digging up and collecting Aboriginal remains around the colony.

Among the many disturbing aspects of British colonisation of Australia was the feverish trade that grew around Indigenous human remains, tens of thousands of which were taken from massacre sites, stolen from graves and burial grounds, and sent to collecting institutions in Australia and abroad. Thousands remain overseas.

There are many statues of Flinders and the cat, Trim, including one at Australia House in London, dedicated in 2014.

It’s beyond time that the first of Bungaree is cast and unveiled on Macquarie Street.

If the federal government can spend $50-plus million celebrating the sestercentennial of Cook’s arrival – including almost $7m on a replica Endeavour circumnavigation that the great navigator never, in history, undertook – surely it can stump up for a monument to the first Australian who did actually sail right around the continent.