You are here: Home » Articles filed under: 'News' » Article: 'Flood of Restitutions' 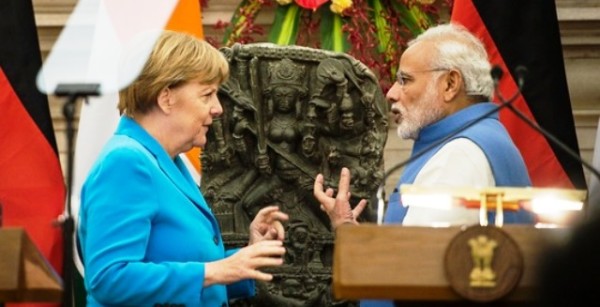 Angela Merkel returns 10th century statue of the goddess Durga. Purchased at auction 15 years ago by Stuttgart’s Linden Museum, it was subsequently found to have been stolen from India. Photo: Bundesregierung/Kugler.

More and more institutions are returning antiquities with unclear provenances to India.

What began as a trickle has now become a flood as more institutions around the world return works of art that were bought from Manhattan antiquities dealer Subhash Kapoor, who ran the now defunct gallery Art of the Past for over three decades. Kapoor is awaiting trial in India on charges of smuggling looted artefacts worth more than $100m. He denies any wrongdoing. His gallery manager Aaron Freedman, however, pleaded guilty in 2013 in New York Supreme Court to possession of stolen property and is working with federal authorities, who have confiscated more than 2,000 objects from storerooms that belonged to Kapoor and his associates. Internal investigations at a number of museums have prompted a wave of restitutions in recent months. We will continue to update the list below: