You are here: Home » Articles filed under: 'News' » Article: 'Focusing attn on the larger cost of everything'

Focusing attn on the larger cost of everything 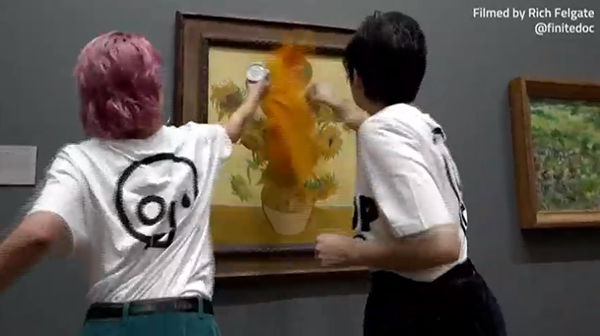 In the latest such incident, young activists splashed tomato soup on a glass-covered painting by van Gogh at London’s National Gallery.

When I see activists attack art, I feel the same revulsion most people do — and the sense of revulsion seems to be general and widespread. After two young supporters of the climate-change advocacy group Just Stop Oil threw cans of tomato soup Friday on a painting by Van Gogh in London’s National Gallery, social media accounts erupted in outrage. Much of this was from people who are no less committed to stopping global warming, including much of the art world, where the climate emergency is at the top of the agenda for many artists, curators and critics.

But while I can’t defend the acts of Just Stop Oil, I can defend the anger of its supporters, who will experience the effects of global collapse further into the future than I will. They must grapple with existential decisions unprecedented even during some of the worst crises in human history, including whether to have children and continue the species, or to forgo offspring whose lives may be short and miserable.

Art attacks seem to be increasing. In July, the Italian group Ultimate Generazione (or Last Generation) directed its ire against Botticelli’s “Primavera” at the Uffizi Gallery in Florence, and in August activists from the same group glued their hands to the base of an ancient statue at the Vatican. All this is misdirected and counterproductive. It makes the urgency of the crisis seem ridiculous to people who are already disinclined to give credence to the science of global warming. And they create a false moral choice for those who love both art and the environment.

As 21-year-old Phoebe Plummer, one of the two activists in London, asked during Friday’s incident, “Are you more concerned about the protection of a painting, or the protection of our planet and people?” The premise of her question, and the people whom she was addressing, are both poorly chosen. Very likely, given the self-selecting audience that visits the National Gallery, most of the onlookers would say: “Both.” And it’s ridiculous to think that art is the villain when it comes to the climate crisis. Van Gogh is too far removed from the economic forces that perpetuate planetary self-destruction for his 1888 “Sunflowers” to be worthy of even symbolic attack.

The art world, of course, isn’t innocent. The wealth that fuels the art market is deeply implicated in the carbon economy, and the superstructure of art fairs, markets, biennales and blockbuster exhibitions is dependent on carbon-intensive travel and conspicuous consumption. Had Plummer taken her soup can to a high-end global art fair, she might have sparked a reasonable though painful conversation about the moral priorities of contemporary art patrons: Do you really need to travel to Venice every two years? Would your millions be better spent on mitigating the climate crisis or on a self-shredding painting by Banksy?

But the anger behind these attacks isn’t irrational, and it isn’t expressed blindly. The global climate situation is dire and getting worse. Though it need not be the only priority of governments, it must be the foremost one. And if you look more closely at how these attacks are executed, it’s clear they express more a desperate love of art than mere rage or contempt for it.

So far, most of these incidents appear deliberately symbolic rather than direct acts of vandalism. In July, Just Stop Oil activists glued their hands to the frame of John Constable’s 1821 “The Hay Wain,” and both the Van Gogh and Botticelli attacks were against paintings protected by glass. The works that have been targeted often represent ideals of natural beauty and regeneration, the very things imperiled by global warming. The goal seems not to destroy art but to issue a warning: This is what will be destroyed if we continue down the path of reckless carbon emissions.

The media attention prompted by these incidents, however, could inspire more, and more deliberately destructive ones, which is one reason they are so disturbing. And the agita they create causes division within the social groups most sympathetic to the cause.

It is ridiculous to attack art in the name of survival, for art is an instrument of survival. But the attacks suggest a new way of thinking about art, in terms of climate, that may help deepen our sympathy for both art and the environment. 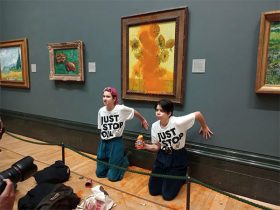 In the world of architecture, the idea of embodied carbon refers to the whole carbon footprint of a building, from that expended on materials, transportation, construction and labor to the longer life cycle of energy needed to power the building. This allows us to compare the carbon impacts of new and existing structures and think more subtly about the costs and benefits of tearing down vs. building anew. It forces us to think about not just the carbon we are emitting now but also the carbon embodied in a house built 50 or 1,000 years ago.

We might productively think about art as a form of embodied culture — energies already released and captured in an object. If art is merely a symbol, or a commodity, or a luxury good, then it’s reasonable to ask whether we care more about art or the environment. But if art is embodied culture, we are compelled to consider its preservation and lasting value even during times of peril. The common wisdom behind both ideas, embodied carbon and embodied culture, is: Never be profligate. Never destroy that for which you have already paid a price, even a terrible one, which includes the damage to the environment from a brutalist landmark built a half-century ago and the admixture of the good and the ugly in art from an age with oppressive value systems.

I think this is why these attacks, misguided and potentially destructive, are happening in museums. It isn’t just about seeking attention and animating the hair-trigger social and information networks that connect people committed to art, the environment, social justice and other adjacent causes.

It is about focusing attention on the larger cost of everything, the whole of the world around us — history, culture and economies. Facing the annihilation of everything, the activists come to society’s last truly sacred space, where the “everything” of human existence seems to be present. Throwing tomato soup on a Van Gogh won’t make me feel any more passionately about saving our planet, nor will it help me think more pragmatically about how to do that. But I understand why young people, facing their own destruction, would come to a place of connection to say: Stop throwing everything away.