You are here: Home » Articles filed under: 'News' » Article: 'For Country, for Nation'

For Country, for Nation 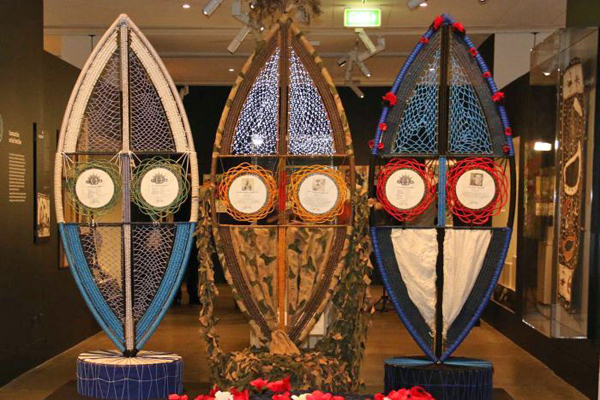 Shields at the entrance to the exhibition. ABC News: Narda Gilmore.

The first exhibition in honour of Aboriginal and Torres Strait Islander peoples’ military service in times of war and peace launched on Thursday at the Australian War Memorial in Canberra.

Aboriginal and Torres Strait Islander peoples fought in the Boer War, World War I, World War II, on the front line at Pearl Harbour, and in all conflicts in which Australia has participated since.

Entitled For Country, for Nation, the exhibition features over 60 specially commissioned works by artists from across Australia, as well as two installations by Victorian-based weavers Aunty Glenda Nicholls and Aunty Clair Bates.

“Unlike other exhibitions at the Memorial, the stories will be told from the perspective of Aboriginal and Torres Strait Islander people, with many shared through first-person voice,” she said.

“Only four or five generations after the arrival of the First Fleet in 1788, living in a desperately unequal Australia, Aboriginal and Torres Strait Islander peoples enlisted to fight for the young nation that has taken so much from them, often denying their heritage to do so,” he said.