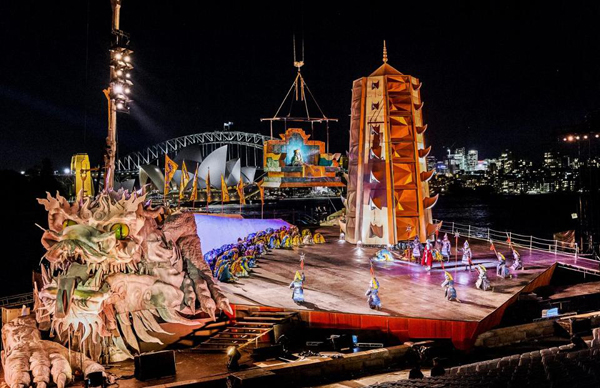 The 2016 Handa Opera on Sydney Harbour production of Turandot was a big hit.

John Oseid, In Sydney, The Opera And Top Museums Are Bursting With New Projects, Forbes, 7 August 2017

So iconic is the Sydney Opera House that most of us know Danish architect Jørn Utzon’s masterpiece as well as if he had built it in our own backyard. But how many outside of Australia know that the city with the stunning harbor is packed with museums of the highest caliber as well? With some big developments coming up on the Sydney cultural front, here’s a roundup of the latest happenings. As if it weren’t enough for Sydney to enjoy one of the world’s most famous opera companies, fans can also delight in performances not only inside the house itself, but with the sail-shaped landmark as a backdrop.

A major event on the Sydney calendar for six years now, the Handa Opera on Sydney Harbour, in partnership with Destination NSW, will stage Puccini’s La Bohème, from March 23-April 22, 2018). Andy Morton, who directed this year’s Carmen, will also direct this new production. With a stage floating in the harbor, and fireworks galore bursting over the opera house and Sydney skyline, the event is a huge crowd pleaser. Mostly in pop-up style, top food and drink establishments serve their finest flavors as well.

The opera’s harbor stage is set up on the eastern peninsular side of the Royal Botanic Garden Sydney, one of the world’s great urban green spaces. On the south side of the gardens, after you’ve negotiated a web of pathways lined with exotic plants to get there, the Art Gallery of New South Wales occupies a handsome late-19th century neoclassical building.

Among a diverse range of paintings, the museum possesses fine Pre-Raphaelites, Monet, Pissarro, Francis Bacon, and Lucian Freud. And soon big change is coming to the institution: Recently given the green light, the $185 million Sydney Modern Project expansion is expected to be completed in 2021 in time for the 150th anniversary of the Gallery.

Recently, Non-Australian visitors in particular had the chance to discover the country’s landscape in paintings, ceramics and tapestries by the great nonagenarian artist John Olsen in a show called The You Beaut Country, which included his brilliant oil painting Sydney Sun (or King Sun). The just-concluded show Adman: Warhol before Pop was a big hit as well for its completely fresh look at the early genius of Andy.

Art devoted to Aboriginal and Torres Strait Islanders is presented in the permanent Yiribana Gallery. Until October 2017, the show Sentient Lands will display sculptures from Northern Australia and images from the desert regions.