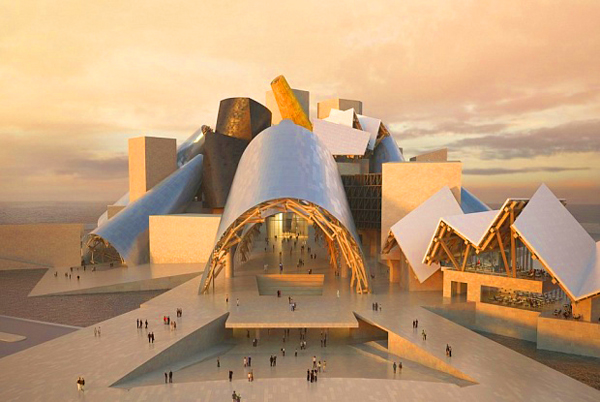 Christina Ruiz, Guggenheim Abu Dhabi should be postponed or downsized, says the man who launched the project, The Art Newspaper, 27 March 2017

The plan to build a Guggenheim in Abu Dhabi should be postponed or downsized believes Thomas Krens, the former director of the Guggenheim Foundation in New York, who brokered the 2006 deal to establish a Guggenheim designed by architect Frank Gehry in the United Arab Emirates.

Speaking on the podcast In Other Words, produced by the art advisory firm Art Agency Partners, Krens said the project to establish a major cultural complex on Saadiyat Island with five new museums was conceived at a time when “people were far more naive” and “could never have happened” today. “The world financial crisis and the Arab Spring has changed the equation radically… it may not be such a good idea these days to have an American museum…with a Jewish name in a country [that doesn’t recognise Israel] in such a prominent location, at such a big scale.”

The fear that the Guggenheim Abu Dhabi, designed to house a collection of international Modern art, could become a target for terrorists in the region was on organisers’ minds from the beginning, Krens said. “One of the biggest concerns was security, because we were right on the edge of the Persian Gulf, and so everybody’s imagination was [about] water-borne terrorism—boatloads of explosives crashing into the museum and blowing it up.” He noted that on the plans: “There are these huge… concrete fences and walls that are planted in the ocean bed with chains through the channels that would not allow boats to come in.”

Although the Guggenheim satellite was first announced over a decade ago and was initially scheduled to open in 2012, construction on the building itself has yet to begin. Of the four other planned museums on Saadiyat Island, only the Louvre Abu Dhabi designed by French architect Jean Nouvel is near completion. Krens suggested local authorities are delaying the start of building on the Guggenheim Abu Dhabi until after the opening of the Louvre outpost in order to gauge local reaction. “The Louvre will open next year. In my view that’s a political calculation that essentially is testing the waters.”

The authorities in Abu Dhabi should now rethink the entire cultural district, Krens said. “If I were them, I would say we’re not abandoning our mission… to building these institutions but we don’t need all five of them up and running at the same time. We’ll do one, the one that is global, because the Louvre is a global, international collection.” In the long-term, “human nature…[may] argue in favour of co-operation and co-ordination,” he said.

A spokeswoman for the Guggenheim said: “At a time when greater understanding among peoples and cultures is especially urgent, the Guggenheim Foundation remains committed to the Guggenheim Abu Dhabi and its transformative potential as a catalyst for exchange and for expanding the narratives of art history. A team of curators based in New York and in Abu Dhabi has been actively developing a curatorial strategy and collection for the future museum. As we continue to work toward the museum’s opening, we are pleased to work with our partners, the Abu Dhabi Tourism & Culture Authority, on a range of ongoing initiatives in education, public programming, and professional development as well as the recent opening of the second exhibition from the Guggenheim Abu Dhabi collection, The Creative Act, in Abu Dhabi.”

The Abu Dhabi Tourism Development & Investment Company, which is overseeing the development of Saadiyat Island, did not respond to a request for comment.