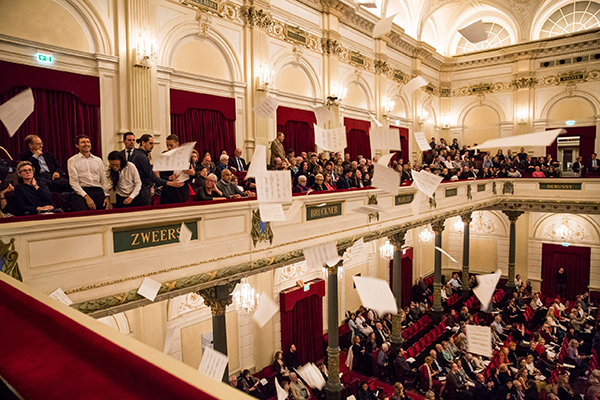 A protest at the Concertgebouw by Fossil Free Culture Netherlands.

The city’s Concertgebouw (concert hall) has confirmed that a financial relationship with Shell ended in January. This means it joins its neighbours the Rijksmuseum, Van Gogh Museum, and Stedelijk Museum in not receiving money from fossil fuel companies.

The company was previously a member of the Concertgebouw’s business club, which includes about 30 corporations. In return for financial support, the club’s members are able to attend “exclusive” receptions at concerts, along with guests and members of the institution’s board of directors and supervisory board.

A spokesperson for the concert hall said: “Shell ended their membership because they changed their partnership strategy in 2019. This was their decision.”

A spokesperson for Shell said: “A little while back Shell decided to revise all its social and cultural partnerships and memberships. The emphasis is now on partners and projects that focus on the energy transition while supporting science, technical education and sustainable entrepreneurship.

“A membership of the business club was no longer a fit with our renewed focus and therefore we decided to cancel our membership already in January of this year. This doesn’t mean we won’t be visiting the Concertgebouw anymore, but we will buy regular tickets at the ticket office.”

Both organisations denied that the membership represented a sponsorship arrangement, even though business club members appear to be described as sponsors on the Concertgebouw website.

The website’s page outlining the benefits the business club says: “The Concertgebouw is proud of its sponsors and they are mentioned in the principal Concertgebouw communications”. It adds: “Our sponsors receive a reduction when renting halls for exclusive corporate events at The Concertgebouw.”

The venue said it could not reveal the cost of business club membership due to contractual obligation.

The decision by Shell followed a series of protests at the Concertgebouw last year by the activist group Fossil Free Culture Netherlands (FFCNL). These involved dropping musical scores and unfurling a banner after performances, and offering “black champagne” at the opening of the venue’s new season.

A partnership between the Van Gogh Museum and Shell ended in 2018, also following protests by FFCNL. From 2000, the organisations worked together to research art historical and technical aspects of paintings by Vincent Van Gogh.

A spokesperson for the museum said: “The partnership in science between Shell Technological Centre Amsterdam and the Van Gogh Museum, which started in 2000, came to a natural ending in 2018 because the research around all paintings within the collection was finished.”

FFCNL says the Rijksmuseum ended a partnership with Saudi Aramco in 2017, although it has not carried out any protests at the institution. The museum did not respond to a request for comment.

The Stedelijk Museum Amsterdam confirmed that it does not receive any sponsorship from fossil fuel companies.

Frida Escalante of FFCNL said: “With our disobedient art performances, we’ve successfully freed our Museumplein from fossil fuel influence. There’s no place for oil and gas criminals in the cultural sector.”

A FFCNL spokesperson argued that the organisation’s surprise creative protest methods were a key part of its success, saying: “We plan our protests like performance art, so they are very artistic and beautiful. The public want to share the images we produce and we have seen more success in the media through this approach”.

FFCNL held a celebratory event in the Museumplein this week that included speeches by opera singer Marene Elgershuizen, who has performed at the Concertgebouw, and Ama van Dantzig, co-founder of the international research agency Dr Monk.

Shell continues to work with science museums and science centers in the Netherlands, including the Rijksmuseum Boerhaave in Leiden and Nemo Science Museum in Amsterdam.