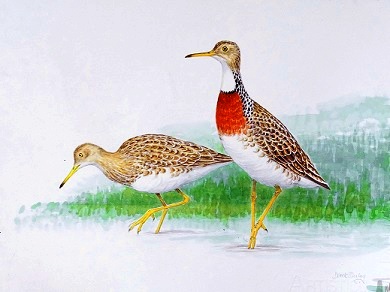 A new species of shorebird, dating from a time when New Zealand was covered in subtropical forests and crocodiles roamed parts of the South Island, has been found near St Bathans in Central Otago.

An international team of New Zealand and Australian-based scientists, including Canterbury Museum researchers, have confirmed that the 19 – 16 million-year-old shorebird fossils belong to a group which had been thought to only comprise the Australian Plains-wanderer and the South American seedsnipes.

The new species, Hakawai melvillei, has been named after New Zealand ornithologist David Melville to honour his efforts in the conservation of migratory shorebirds.

Lead author and Canterbury Museum researcher, Dr Vanesa De Pietri, says that the team were excited to discover that the fossil shorebird was not a typical wader, but more like an ancestral Plains-wanderer, with some seedsnipe-like features. The Plains-wanderer and seedsnipes are unusual shorebirds as they have adapted well to living on the land.

“We’re happy to have found a fossil bird that provides a key morphological link between the two groups. The discovery of Hakawai melvillei has confirmed our thinking that the ancestors of the Plains-wanderer and seedsnipes were wading birds, like most other shorebirds,” she says. “It has also confirmed previous research I’ve undertaken, with colleagues, that the Plains-wanderer and seedsnipes evolved their terrestrial habits independently.”

The discovery sheds light on evolutionary processes at work when South America, Antarctica, Australia, and New Zealand were part of the southern supercontinent of Gondwana. Hakawai melvillei, the Australian Plains-wanderer and the South American seedsnipe are all thought to have originated in East Gondwana.

Canterbury Museum Senior Curator of Natural History and co-author of the study, Professor Paul Scofield says: “Hakawai melvillei probably became endemic to (only occurring in) New Zealand when we drifted apart from the rest of Gondwana. We also know from all the juvenile and chick bones we found that it bred locally near lake shores.

“Over millions of years, the Plains-wanderer has efficiently adapted to a changing Australian landscape – from forests to sparse native grasslands. Unfortunately due to the loss of its natural habitat, it is now one of Australia’s most endangered birds”, he adds.

Dr Trevor Worthy, a New Zealander working at Flinders University in South Australia who led the study, says “The discovery of Hakawai melvillei adds to an emerging story of New Zealand’s role in the evolution of birds in the Southern Hemisphere. Unfortunately, like crocodiles, turtles, and some tropical birds, which once inhabited New Zealand, the lineage represented by Hakawai melvillei is long gone. We’re not sure what happened, but climatic and geographic changes during that time may have been partly responsible for its demise”.

The team have published their research findings in the Journal of Systematic Palaeontology today.

Note: Morphology is the branch of biology concerned with the form and structure of organisms.