You are here: Home » Articles filed under: 'News' » Article: 'Fostoria – dinosaur discovered by' 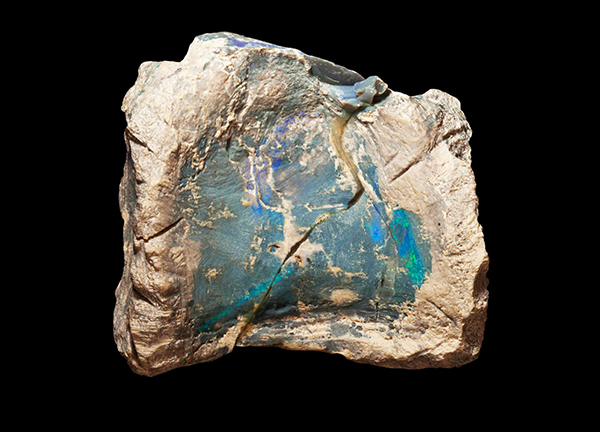 One of the backbones of Fostoria. Credit: Robert A. Smith, via Australian Opal Centre.

Jamie Tarabay & Genevieve Jia Ling Finn, He Was Looking for Opals, Instead, He Found a New Dinosaur Species, The New York Times, 4 June 2019

SYDNEY, Australia — Lightning Ridge is a town about 450 miles inland from Australia’s eastern coast, yet as he mined for opal there 35 years ago, Bob Foster would find remnants of fish bones and mussels.

Forty feet below the surface, where water might have flowed some 100 million years ago, animals died and their bones became encrusted with colorful stone.

Mr. Foster and his fellow miners would smash those bones apart to see if opal, Australia’s national gemstone, lay beneath. One day he came across a semicircle-shaped bone that he thought might be a horse hoof but turned out to be the vertebrae of a dinosaur that was previously unknown.

Now it is named Fostoria, after him.

After years of studying the remains Mr. Foster found, scientists reported the discovery of the plant-eating species on Monday in the Journal of Vertebrate Paleontology.

Additionally, the remains belonged to at least four different dinosaurs, making them the first fossils from a herd or family group to be discovered in Australia. Paleontologists found that the skeletons ranged in size from juvenile to an adult of 16 feet in length. 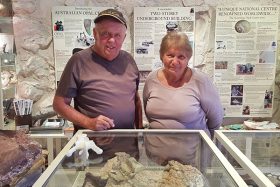 Bob Foster, with his wife, Jenny Foster, at the Australian Opal Center in Lightning Ridge. Mr. Foster discovered the opalized bones of Fostoria in the 1980s.CreditJenni Brammall.

They are also the biggest collection of dinosaur fossils preserved in opal, said Phil Bell, a paleontologist at the University of New England in Armidale and leader of the study.

“In the last decade or so, we’ve seen an explosion in the number of discoveries,” Dr. Bell said.

Mr. Foster’s fossil collection “provides insight into dinosaurs and their distribution on the continent that we haven’t had before.”

The Fostoria species, which lived in the mid-Cretaceous period, almost went undiscovered.

Fed up with the abundance of bones he kept digging up in his mine, in 1984 Mr. Foster filled two large suitcases with the remains and made his way to Sydney, nearly 500 miles away. Back then the trip took the better part of a day.

At the city’s Australian Museum, Mr. Foster asked to see the paleontologists who had asked members of the public to come forward with any fossils they found.

“I said, ‘I’m the bloke who rang you up, I’ve got two bags of dinosaur bones here,’ and they looked at each other like, ‘Here’s another one’ — they get people coming in all the time,” Mr. Foster recalled.

“I was a bit tired by then,” he said. “I’d carried these suitcases on the train, and the bus, and up the stairs, and I opened them and threw the bones all out on the table and they were diving to catch them before they landed on the floor. They changed their approach.”

The museum sent army reservists to excavate the site in Lightning Ridge, removing blocks of rocks and fossils.

But the fossils were left unstudied for 15 years. One day, Mr. Foster spotted some of them in a display case at an opal store in Sydney. He reclaimed what he could, bringing them back to Lightning Ridge and donating them to the Australian Opal Center in 2015.

There, Dr. Bell began to study them.

“Bob wanted his fossils to go back to Lightning Ridge where they belonged as part of their natural heritage,” he said.

He believes even more discoveries will be made around Lightning Ridge, where another species, the Weewarrasaurus, was discovered last year.

“We’re encouraging miners to come forward and show us what they’ve got,” Dr. Bell said. “It’s really hard and fatiguing work, so we’re indebted to miners for their work.”

Now 75, Mr. Foster has retired to a small town along the coast of New South Wales. His mine is now abandoned.

“It’s all finished out there,” he said.

And how did it feel having a dinosaur species named after him?