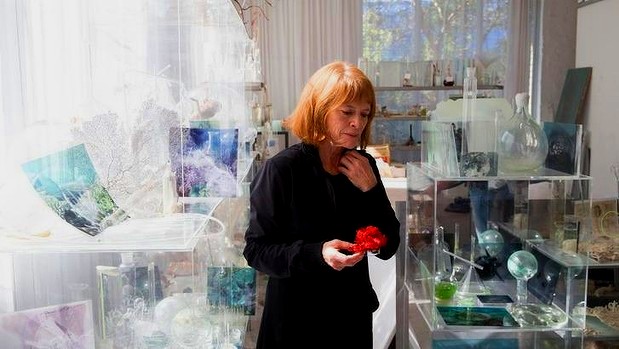 Surrounded by a boneyard of coral and fish skeletons and shelves of laboratory glassware in her studio, Janet Laurence bears a heavy weight on her shoulders as she prepares her latest artwork.

The artist’s Deep Breathing (Resuscitation for the Reef) will present one of Australia’s greatest natural wonders to an international audience gathered in Paris for the United Nations climate change conference.
…

“I’ve also cast a lot of skeletal matter and corals and I’ve cast coal because you know we can’t ignore that factor,” she says, alluding to the coal export facilities along the Queensland coast.

It will also feature fish and turtle specimens borrowed from the Australian Museum and Paris’s Museum national d’Histoire naturelle, where it will be displayed.
…

The main focus of Laurence’s artwork is coral bleaching. But she says: “it’s also on the acid waters, the crown of thorns starfish, the fact that shells are getting less robust, thinner, you know, the fragility of so much life there due to the polluted and warming waters”.

Laurence says the reef also bears the scars of recent cyclones, which are thought to be intensifying as a result of climate change: “It’s the direct effect of man and then of course the climate change over a longer period of time.”

The museum’s chief executive Kim McKay agrees that the reef had been affected by climate change.

People were entitled to their opinion, but policy should be guided by expert opinion, she says. “In this particular case, world expert opinion and now it seems world political opinion is firmly behind the reduction of carbon emissions because they are a contributor to global warming.”